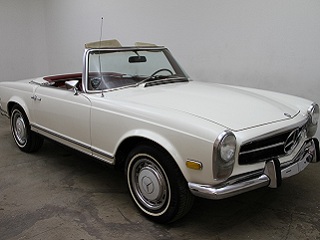 Introduced in 1967 and continuing production through 1971, the 2.8 liter 1968 Mercedes Benz 280SL was the final version of the W113. The engine was the next stage of evolution for the M130 and a larger bore increased displacement to 2,779cc, thus giving the car 180-horsepower and increased torque. It also featured new, flatter wheel covers, as well as less chrome on the instrument panel and door panels, in compliance with new 1968 safety standards. Otherwise, the 1968 280SL was essentially the same car as its predecessor. Interestingly, most Mercedes 280SL models built for the U.S. markets were equipped with an automatic transmission. Manual transmission 1968 Mercedes SL cars are somewhat rare in the United States and are, therefore, sought-after by American collectors. Today, the W113 Pagoda is considered a highly desirable collectors car, and current values suggest that the Mercedes 280SL is the most desirable of the three models.

For those who are trying to decide between a 1968 Mercedes Benz 280SL and the other W113 models – the 230SL and the 250SL – let’s take a look at a few Buyer’s Tips. The 1968 Mercedes roadster 280SL is popular among collectors who prefer owning the last car in the series, which is generally the one that has all the technological advances and power of the line. This is certainly the case with the 280SL. The 250SL, being quite a bit more rare, is also popular with collectors who prefer the somewhat stiff suspension and sportier feel of the early cars. This car also is more stripped down on the interior and does not have many of the plush upgrades of the later models. Then there is the 230SL, which is widely available and demands a lower price due to the perception of lower performance from a smaller engine. All three models are prone to rust, especially in the floors, trunk and under the doors, however parts including engine, transmission, interior and rust repair panels are readily available for those looking to take on a restoration project.

If this Buyer’s Guide for the 1968 Mercedes Benz 280SL has made you want to find one more than ever, the classic car specialists at the renowned Los Angeles classic car dealership – The Beverly Hills Car Club – look forward to helping you. They encourage you to browse this website to view their current inventory and welcome you to contact them with your specific needs. They have the European classic car connections needed to ensure you find the right model to not only suit your needs, but to also exceed them! Connect now!