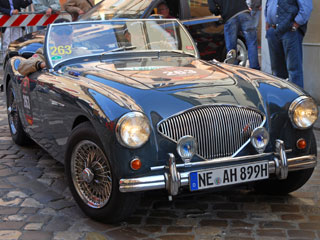 The Austin-Healey 3000 was one of the most successful family sports cars of its generation, winning rallies around the world. The best known of the Big Healey models, the Austin-Healey 3000 was produced from 1959 to 1967 in three variations; Mark I, Mark II, and Mark III. The Austin-Healey 3000 BJ8 series or the Mark III was considered to be the most powerful and luxurious of all the Austin-Healey roadster series cars. Launched in 1963, the BJ8 remained in production until 1967. Its outstanding power was produced with a six-cylinder 2912cc engine and a four-speed manual gearbox with an optional overdrive system. Top speeds of 122 mph were common and 60mph could be reached in 9.8 seconds. The luxury of the BJ8 series is what set the car apart from its Triumphs and Jaguar convertible counterparts. Inside the car owners found more comfortable seats in a 2+2 configuration, a Walnut veneer dashboard and center console, and wind-up windows gave a more luxurious feel.

The power and luxury, combined with a reasonable price ensured that the Austin-Healey 3000 BJ8 was a popular purchase when launched. In fact, the BJ8 became one of the most popular exports to America as they suited the American market. Today, the Mark III has become a favorite among collectors and restorers alike. If you are looking to buy classic Healey cars including the BN1, BN2, BN6, BN7 or BN8 models, the team at the Beverly Hills Car Club has compiled a few tips for your benefit. First, before purchasing have it inspected by a qualified mechanic. Second, do your research and find out what other buyers are paying for a similar vehicle. Lastly, consider buying your vehicle via a specialized classic European and American car dealer such as the Beverly Hills Car Club.

Should you have any questions or would like to speak with a representative regarding the Austin-Healey 3000 BJ8 or any classic European or American car, the specialists at the Beverly Hills Car Club are always just a phone call or email away. Please feel free to leave your contact information and a member will get back with you quickly. We look forward to hearing from you soon!