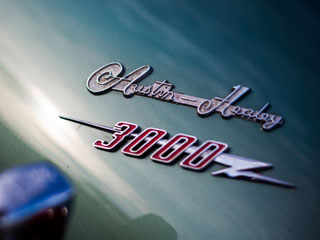 Replacing the popular Austin-Healey 100-6 series, the Austin-Healey 3000 was introduced in 1959. Designated internally within the company and among enthusiasts as the Austin-Healey 3000 BN7, despite the major name change, the changes to the car were relatively minor compared to the changes we saw between the original 100 and the 100-6 for example. In fact, the wheelbase and body remained unchanged, and there remained two distinct models: a 2+2 and a two-seater. The original 3000 or Mark I, which was only referred to as the Mark I after the Mark II was released, offered wire wheels, overdrive gearbox, a laminated windscreen, a heater, an adjustable steering column, a detachable hard top and two tone paint. Built from March 1959 to March 1961, more than 13,000 were made. Later Austin Healey 3000 Mark II BN7 models and Mark III or BJ8 models would be launched, both improving upon the original Mark I.

Buyers tips for those considering the Austin-Healey 3000 BN7 are simple: do your homework, or just call us! With the advent of the Internet, finding out what other Austin-Healey Roadster autos sold for is fairly simple. In addition, todays buyers want to see as much information on the vehicle as possible. The team at the Beverly Hills Car Club specializes in the purchase and sale of exclusive European and American classic autos. Whether this is your first purchase or you are an avid car enthusiast who has bought and sold collectors vehicles for decades, the Beverly Hills Car Club can help! We are always looking to buy and sell Austin-Healeys of all conditions including the 100-4 and 100-6 series and BN1, BN2, BN6, BN7, BJ8 and 3000 models.

To learn more about the Beverly Hills Car Club or to inquire about your Austin-Healey 3000 BN7, their team is always just a phone call or email away. Whether you’re looking for a Jaguar convertible thats been sitting in the barn for 30 years or simply want to see what the options are to buy classic restored Healey, Porsche or Mercedes cars, connect today! We look forward to hearing from you soon!