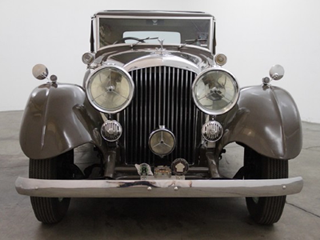 First announced in May 1946, the Bentley Mark VI was built at the Crewe factory until 1952, when the model was replaced by the Bentley R-Type. The Mk VI was the first model to be completely assembled and finished at the new factory and also the first to be made with a steel body. The car was, as a result, referred to as the Standard Steel model. The model was a four-door sedan with a sliding sunroof. Fitted with an inlet-over-exhaust valve, six-cylinder engine, the 1951 Bentley Mark VI was a very powerful model for the era. Performance was improved in 1951, when the capacity of the engine increased from 4.2/4.3 to 4.5/4.6 liters. Power was transmitted to the wheels via a four-speed manual gearbox.

Looking to purchase a classic Bentley?

With its larger engine, the 1951 Bentley Mark VI delivered 150 hp and could reach a top speed around 100 mph, which makes it a powerful classic for collectors who enjoy good performance on top of body style. Based in Los Angeles, The Beverly Hills Car Club has a large warehouse and many classics for sale. Whether you’re looking for a model in mint condition or one that requires restoration, the representatives are a very useful resource. They’re great at helping buyers find the right model, in their collection or from another seller anywhere in the world. If you’re looking for a 1951 Bentley Mark VI that needs a lot of work, be aware that the budget for restoration can be several time the value of the car. A mechanically sound and rust-free Bentley Mk VI however, will be a very reliable and relatively inexpensive classic.

Please don’t hesitate to reach out to The Beverly Hills Car Club team anytime to ask for their help with your project of buying a 1951 Bentley Mark VI. Be assured that they will welcome you in a friendly and hassle-free environment and enjoy talking about classics from gear head to gear head, whether or not you’re purchasing one of their cars.