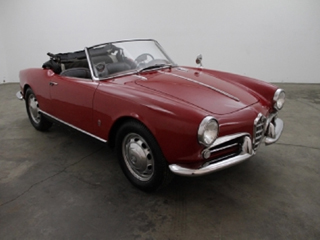 The release of the 1959 Alfa Romeo Giulietta marked a new version of the Giulietta, which had made its debut in 1954. This new version would be unveiled to the public at the Frankfurt Motor Show and would feature several notable changes. Among the changes was the repositioning of the fuel tank to the right rear fender, a redefined nose with more rounded wings, recessed lights, new headlights and front grille rings revised with horizontal bars. Inside the 1959 Alfa Romeo Giulietta, owners thought the car was much more organized and the dashboard boasted instruments with an elongated bore. Previous Giulietta models were part of the 750 and 753 series, while these new models were designated the 101 series. There were several Giulietta body styles available at the time. The Bertone-designed and built Sprint would be perhaps the most popular, while an open two-seat Spider and four-door Berlina TI were also available. These models were also available in various states of tune, including the 50hp Berlina, 65hp Normale, and the 90hp twin-carburetor Veloce editions.

During 1962, the Alfa Romeo Giulia would join the Giulietta, ultimately replacing it. Together, these two series would take Alfa Romeo from a company that manufactured approximately 12,000 Alfas during its first 42 years to almost 180,000 Alfas between 1954 and 1965. If youre considering buying a 1959 Alfa Romeo Giulietta, there are several steps you should take to ensure youre purchasing the best example for your specific needs. As with most classic cars, it is always in your best interest to find the best, most complete example you can for your budget. Even though Alfa Romeo models are far less expensive that some other Italian classics, bodywork for these early Giulietta models can be costly. Stay away from examples that are plagued with rust and try to find examples that are as original as possible. If the seller has documentation regarding the cars maintenance and service history, this can be quite valuable in getting an overall picture of how the car was treated during its life. Similarly, it is always advisable to have a pre-purchase inspection performed by a qualified Alfa Romeo expert. These are just a few of the Buyers Tips that The Beverly Hills Car Club has learned over their years of experience in the classic car industry.

To learn more about the 1959 Alfa Romeo Giulietta or to explore other classic Giulietta models currently in The Beverly Hills Car Clubs inventory, please do not hesitate to browse this website at your leisure. Dont see the car youre looking for? Contact a member of The Beverly Hills Car Club team today to discuss your dream car. They will be happy to help you find the car you desire. Connect today!