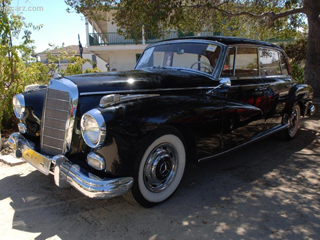 First launched in late 1951, the Mercedes Benz Type 300 was the ultimate luxury car of its era and was Mercedes largest and most-prestigious model. The 300 models were touring cars, often referred to as Adenauers after Konrad Adenauer, the first Chancellor of the Federal Republic of Germany. Throughout his tenure, Konrad enjoyed six custom convertible, hardtop, and limousine versions, thus the nickname today. If you're considering the purchase of a 1960 Mercedes Benz 300D, or any of its sister models, you can rest assured knowing you will own one of the most historic pieces of Mercedes Benz history. Introduced in August 1957, the 1960 Mercedes 300D was the linear successor to the 300C model and featured a longer wheelbase, fuel injection, and a unique hardtop configuration, which was able to transform the Mercedes 300D into a pillar-less gem.

The extra length in the wheelbase provided owners with more rear legroom and positioned the 1960 Mercedes Benz 300D as a direct competitor of the Rolls-Royce Silver Cloud. During their time, these autos were used widely as limousines for their well-heeled owners and for many government officials, heads of state, and even the Pope! The hardest part of purchasing a 1960 300D is finding one! A total of only 3,077 300D models were produced through March 1962, many of which are not in existence today. Another Buyer's Tip is to ensure you have thoroughly inspected the 300D for rust and originality. If this is a restoration project, youll also want to know what parts come with the car, as replacement parts are difficult to find.

The Beverly Hills Car Club, a leading California classic car dealership, has assisted countless clients with the purchase and sale of 1960 Mercedes Benz 300D models and other European classic cars. They encourage you to tour their website to learn more about their current inventory and welcome you to contact them with any questions you may have. Connect today!