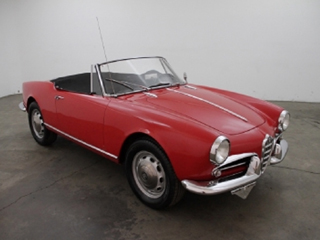 First debuted in 1954 at the Turin Motor Show, the Alfa Romeo Giulietta would become one of the Alfa Romeos most recognizable and loved models. The first Giulietta model was a Giulietta Sprint Coupe. This would be followed in the spring of 1955 by the Berlina Sedan and in mid-1955 by the open two-seat Giulietta Spider with bodywork by Pininfarina. Styling changes were implemented in 1959 and again in 1961. The 1961 Alfa Romeo Giulietta was quite similar to its predecessor, yet the Berlina TI edition would get a new engine that would catapult the car to a top speed of nearly 99mph. Production of the standard Berlina would continue until 1963, while the Berlina TI would continue for another year. Other popular options during this time included the Sprint Veloce, Spider Veloce, and Promiscua wagon. The Promiscua would see only 91 examples manufactured, while much larger numbers were seen in the production of the other body styles.

Today, the Sprint and Spider Veloce editions of the 1961 Alfa Romeo Giulietta are perhaps some of the most desired, as well as those from other model-years. It is estimated that approximately 2,058 Sprint Veloce examples and 2,796 Spider Veloce examples were produced in all. Boasting extra horsepower via upgrades to the carburetors and steel-tube exhaust headers, the Veloce examples are a great way to experience classic Alfa Romeo ownership at its finest. Values for the classic Alfa Romeo Giulietta have past entry-level status over the past decade, particularly for the Sprint and Spider models. Berlina models, on the other hand, continue to be relatively affordable for enthusiasts and collectors of most budgets. Whether youre looking for an Alfa Romeo Giulietta that you can restore, a pristine example that is ready for weekend getaways or a fully restored example for your showroom, href=”about-beverly-hills-car-club.htm”>The Beverly Hills Car Club is happy to assist you in finding the classic Alfa Romeo you desire. Always happy to speak with other Alfa enthusiasts, their team welcomes you to contact their Los Angeles classic car dealership today.

To learn more Buyers Tips for the 1961 Alfa Romeo Giulietta or to speak with a representative regarding any of the classic Alfas you see in their online inventory, connect with The Beverly Hills Car Club team today. Backed by years of experience in the classic car industry, they look forward to sharing their knowledge and expertise with you and to helping you find the perfect Alfa Romeo Giulietta for your garage. Call today to get started.