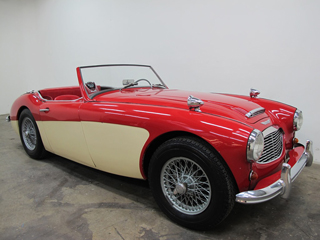 The 1961 model year marked the last production run of the Austin-Healey 3000 MKI, which was nearly identical to its 100-6 predecessor except for its larger, improved engine and disk brakes. Available as both a two-seater and in a 2+2 configuration, many collectors prefer the lines of the BN7 (or two-seater) and you will likely see this reflected in prices as you begin your search for a 1961 Austin-Healey 3000. A 1961 3000 example with additional options such as two-tone paint, a hardtop, an overdrive gearbox or wire wheels can also be more valuable. Offering a 124hp straight-six engine, the 1961 Austin-Healey was popular in its day, and continues to be popular today. Almost 14,000 of the MKI Austin-Healey models were sold before the MKII replaced it at the end of the year.

Although the Austin-Healey 3000 is considered a separate model from the 100-6, it is actually quite the same. In fact, the chassis platform is identical. The steel ladder-frame consists of two square main tubes that run the length of the car. Two cross-members are also located at each end of the frame, with an x-brace located under the passenger compartment. Most of the inner body, bulkheads and floorboards are welded to the chassis. The Beverly Hills Car Club mentions this construction because it is something to keep in mind if you are planning a restoration. You see, a true body-off restoration is quite difficult, as those pieces would have to be cut off and re-welded. This can be not only time consuming, but also costly. This is just one of the many Buyers Tips that their team of professionals has learned throughout their many years in the classic car industry. Whether youre searching for a pristine example of a 1961 Austin-Healey 3000 for your private collection, as an everyday driver, or as a restoration project, their team encourages you to connect with them today to discuss your options.

Specializing in the sale of classic European and American cars of all conditions, The Beverly Hills Car Club is a California classic car dealership with a reputation for fair and honest car deals. When youre ready to make your next classic car purchase as smooth and successful as possible, contact their team. They look forward to hearing from you and to discussing your next 1961 Austin-Healey 3000. Connect today!