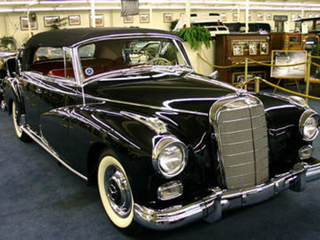 Introduced in August 1957, the Mercedes Benz 300D was the natural successor to the 300C, although the history of the Type 300 goes back much further. First debuted at the 1951 Frankfurt Auto Show, the Type 300 was an ultra-luxurious and exaggerated saloon car that was not designed for the regular public; rather the most elite and affluent buyers of the day including the Pope, Federal Chancellor of Germany Konrad Adenauer, actors Gary Cooper and Errol Flynn, and American Presidents Dwight D. Eisenhower and John F. Kennedy. Known as a diplomat’s car and often referred to as the convertible limousine, the 1961 Mercedes Benz 300D Cabriolet (and other model years) would continue throughout history as one of the most sought-after and luxurious German saloons to ever be built. If you’re thinking about buying a 1961 Mercedes 300D Cabriolet, you’ve come to the right place for valuable Buyer’s Tips and the resources you need to find, negotiate and secure the classic Benz you desire.

If you’re specifically looking for a 1961 Mercedes Benz 300D Cabriolet, you probably already know that only one model was ever manufactured. In fact, only 65 300D Cabriolets in total were manufactured between July 1958 and February 1962. As such, one of the biggest challenges to purchasing a 300D Cabriolet is finding one. Because very little if anything changed from 1957 to 1962, many buyers set their sights on a particular generation rather than a particular year model; which give more available models. When searching for a Mercedes 300D Cabriolet, always begin with a thorough inspection of the car’s body and mechanics. In general, the body is more important than the mechanics because these were hand-built and are difficult to restore. Chrome trim pieces are also exceptionally costly, so finding an example with intact chrome is a plus. Mechanically speaking, parts are generally available. As with all classics, be sure to ask the seller for any documentation they have on ownership history, maintenance or restoration.

For more Buyer’s Tips like these for the 1961 Mercedes Benz 300D Cabriolet or to explore their online inventory, do not hesitate to contact The Beverly Hills Car Club today. They look forward to hearing from you and to sharing their knowledge and experience with you. Backed by years of expertise in the classic car market, they are a California classic car dealership with a worldwide reputation for fair and honest car deals. Let them show you the benefits to partnering with The Beverly Hills Car Club. Connect today!