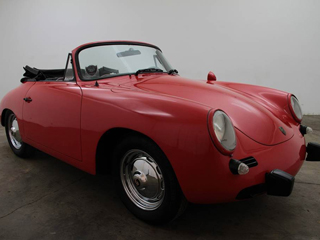 First released in 1960, the Porsche 356B was the third generation in the long-lived production of the 356. A number of appearance changes took place with the release, including repositioned, larger bumpers with new vertical bumper guards, and headlights that were raised so the fender line was now almost horizontal from the cowl to the headlight rim. In 1962, the 356B was updated with a T-6 body. The T-6 boasted a squared-off front hood and a larger windshield and rear window. The fuel filler was also moved from under the hood to a flap in the right front gender. There was also an air intake vent on the cowl to provide better ventilation for passengers. During this production year, the 356B would be available as a Coupe, a Cabriolet and as a Roadster. The 1962 Porsche 356B Cabriolet should not be confused with the soft-top Roadster, as the Cabriolet was simply the open-air version of the Coupe. The Roadster was its own unique model and did not correspond to the Coupe.

Of the 7,767 Porsche 356B models manufactured during 1962, approximately 1,566 were 1962 Porsche 356B Cabriolet models. When compared to the 6,201 units of the Coupe that were released during the same time, it is easy to understand why the Cabriolet is often difficult to find. When buying a Porsche 356B Cabriolet, be sure to verify its authenticity by checking the chassis and engine numbers against Porsche records. You’ll also want to find the most complete and best condition model you can within your budget, as restoring these classic Porsche 356 models can become quite expensive. For those buyers looking to use their 356 as an everyday or occasional driver, it is often in their best interest to find a model that has previously been restored, yet is no longer in show condition. On the other hand, if you’re looking for a pristine, showroom quality model, you’ll want to ask for restoration receipts and documentation to confirm that the restoration was done to your standards. Lastly, if you’re ready to take on a restoration project, look for a 1962 Porsche 356B Cabriolet that has the least amount of rust and the most complete set of components to minimize your out-of-pocket expenses during restoration.

For more Buyer’s Tips like these for the 1962 Porsche 356B Cabriolet, please do not hesitate to contact The Beverly Hills Car Club today. Their team looks forward to hearing from you and welcomes the opportunity to earn your trust and business. They also encourage you explore their online inventory to view the 356 models currently in their showroom. Should you have any questions, connect with their team today!


We Also Buy Classic 1962 Porsche 356 B Cabriolets In Any Condition, Top Dollar Paid.