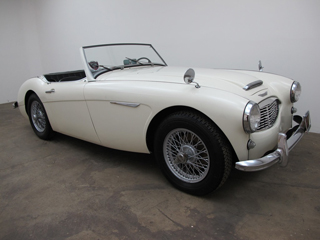 The Austin-Healey 3000 MKIII was introduced in 1963 and would run until late 1967. By the time the MKIII was built, however, nearly everything about it was obsolete; the car represented the style and technology of the previous decade. Nevertheless, buyers craved the character and style that oozed from nearly every curve of this British sports car, and they still do! Today, the 1963 Austin-Healey 3000 (and the other year models) is perhaps the most popular of the Big Healeys and continues to be one of the most sought-after classics of the brand. The MKIII offered roll-up windows and a true convertible top like the Series BJ7 cars, but also added a walnut burl wood dash panel and center console to make it the most luxurious of the Big Healey cars. A far cry from its roots, the raw 100-4 and 100-6, the MKIII 3000 was more of a grand touring car than a sports car. Other improvements over the MKII included the addition of power-assisted brakes, more power thanks to bigger carburetors, and a softer, more comfortable ride.

When looking to buy a 1963 Austin-Healey 3000, you actually have several options available to you. The first 1,390 examples of this model are often referred to as the Phase I cars, which can be identified by the addition of a cubby box at the rear of the center console. Then, nearly six months into production, the ride height was increased, and the cubby box was eliminated. These cars are often called the Phase II cars. Many collectors prefer the Phase II of the MKIII Healeys because of the ride height improvement. Previously, the 1963 3000 and its predecessors were known to scrape the ground on even the smallest of obstacles. This is something to be aware of as you begin your search. No matter what model of the 1963 Austin-Healey you choose to go with, one thing is certain, it will have the same great looks and stylish beauty that collectors and enthusiasts around the globe have been praising for decades. In fact, with extra chrome around the windscreen and windows, many believe the appeal was enhanced on these cars.

To learn more Buyers Tips for the 1963 Austin-Healey 3000 or any British classic, be sure to connect with the California classic car dealership professionals at The Beverly Hills Car Club. Their team of experts looks forward to hearing from you and to helping you find the Austin-Healey you desire. In the meantime, they invite you to browse their online inventory to view available models. Connect today!