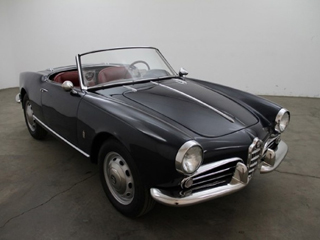 The Alfa Romeo Giulietta vastly increased the profile of the Alfa Romeo Company internationally, but perhaps the most in the United States. The first model to be released was the Giulietta Sprint, a 2+2 Coupe designed by Bertone in 1954. It offered a 1,290cc engine and 65hp. In April of the following year a Giulietta Berlina Sedan would appear. It was a four-door, boxier design with the same mechanicals of the Sprint, but a longer wheelbase and a reduced 53hp from the same 1,290cc engine. A prototype Giulietta Spider would also appear in 1955 and would join the lineup at the Turin Motor Show the following year. Other popular options would include the Sprint Veloce in 1956 and the Giulietta TI, Sprint Speciale and Sprint Zagato (or SZ) in 1957. Models produced prior to 1959 are considered part of the 750 series. The 1964 Alfa Romeo Giulietta is considered part of the second-generation of Giulietta the 101 series that debuted during 1959. During this time, some small changes were made to the engine, yet no official change in output power was seen. Most of the changes were to improve the reliability of the engine. For this and other reasons, the 1964 Alfa Romeo Giulietta (and other model-years from the 101 series) are considered excellent candidates for daily drivers and weekend grocery-getters.

When buying a 1964 Alfa Romeo Giulietta, finding the most complete and original example you can within your budget is always advisable. While the Alfa Romeo is less expensive than other Italian classics, bodywork on these particular cars can be quite costly. Youll want to keep this in mind when inspecting models for purchase, as restoring an Alfa Romeo Giulietta plagued with rust can be quite a financial undertaking where the amount of money you put in may far exceed the actual value of the car when fully restored. As far a mechanics go, the Alfa Romeo Giulietta is known for having a quite hearty engine; youll generally find that mechanics are in good shape or are easily worked on. However, the Giulietta was known to have some head gasket issues. Most of these issues would have been worked out over the course of the cars lifetime, yet it is always a good idea to ask sellers for any documentation they have regarding ownership history, maintenance and service, or restoration.

For more 1964 Alfa Romeo Giulietta Buyers Tips like these, The Beverly Hills Car Club encourages you to contact them today. Backed by years of experience in the classic car industry, their team looks forward to sharing their knowledge and experience with you. From rolling chassis and models in need of complete restoration to pristine examples ready for the next auto show, let their team help you find the classic Alfa Romeo you desire. Connect today to get started!