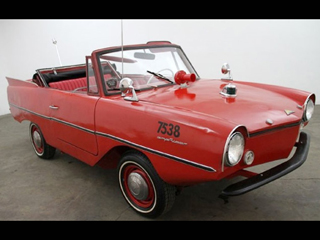 The Amphicar, produced in Germany from 1961 to 1968, is the only non-military amphibious vehicle ever put into production on a commercial basis. Capable of 70mph on land and 7 knots on water, the 1964 Amphicar (and other model-years) is often referred to as the Model 770. The Amphicar offers a Triumph Herald four-cylinder 1,147cc engine. Used in the Triumph Herald 1200 and later in the Triumph Spitfire, later versions of this engine would displace 1,296cc and 1,493cc. It is not uncommon to find Amphicar models with these updated engines, as owners would fit these engines throughout the years to improve performance. While the Amphicar was never considered a high-performance auto, it has always been and continues to be a novelty for those who appreciate its uniqueness and charm. In fact, events called swim-ins can be found nationwide, where Amphicar owners convene to share their passion for these exceptional classics. While the factory had inventory and plans for production in excess of 20,000 models per year, total production was little more than 4,500 units before the company folded in 1968. The majority of these cars were sent to the United States.

One important characteristic of the Amphicar is the way the cars were titled. A 1964 Amphicar, for example, could have been assembled years earlier but would be titled in the year it was first sold. To understand the specific assembly and title history of any of the particular Amphicar youre interested in, be sure to ask the seller for any documentation they have regarding ownership history. Similarly, you can compare engine and chassis numbers against historical records to learn more about when the car was assembled. However, throughout production little would change from model-year to model-year. Perhaps the most important Buyers Tip for the 1964 Amphicar and other models is to ensure that you fully understand the overall condition of the classic. When is the last time the car has been in the water? What is the cars performance like on land? What is the extent of any rust damage? If it is a restoration project, are their additional parts included with the sale? These are just a few of the questions you should ask in addition to having a third-party inspection, preferably by someone with knowledge of these unique classics.

To learn more about the Amphicar or to explore the models currently available through The Beverly Hills Car Club, please do not hesitate to browse the online inventory found throughout this website. Dont see what youre looking for? The Beverly Hills Car Club has the industry connections needed to help you find the classic Amphicar you desire. Contact them today to discuss your particular desires. They look forward to hearing from you soon!