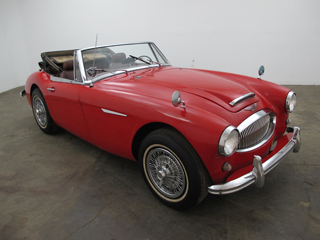 Austin-Healey enthusiasts were given another reason to rejoice in 1964, when the 3000 MKIII was updated with a totally revised dash, which included a beautiful wooden fascia panel, and a burly new version of the engine. This new version offered dual two-inch-choke SU carburetors, presenting no less than 148hp. For the first time, Healey and the British Motor Company offered a Big Healey that could beat 120mph and delivered excellence in performance mechanically, and also in comfort and style for the passengers. The car was an instant success and the 1964 Austin-Healey 3000 (as well as its other year models) continues to be one of the most sought-after of the Big Healey models and of British sports cars in general. Also in 1964, the MKIII 3000 proved to be successful in motorsport as well. Its most accomplished feat was when driver Rauno Aaltonen drove to win the Spa-Sofia-Liege Marathon. This race is considered the last, the fastest and the toughest open-road rally to ever be held in Europe. Whether it is its distinguished history or sleek styling that draws you, or simply the opportunity to own a piece of British car history, the team at The Beverly Hills Car Club would be delighted to discuss your options with you.

If youre in the market for a 1964 Austin-Healey 3000, The Beverly Hills Car Club recommends driving one first, as it may or may not meet your expectations. Due to a lack of power steering and power brakes on the early cars, many find the 3000 more difficult to drive than they anticipated. Overdrive makes a big difference, so look for cars with this option if modern-day drivability concerns you. Its also important to realize that these are very low-profile cars and the exhaust system can scrape on what seems like insignificant bumps in the road. If youre tall, interior space can also be an issue, however if you opt for an earlier car with side curtains as opposed to roll-up windows, you can get the illusion of more space. Furthermore, their team of California classic car dealership professionals encourages you to buy the best car you can afford. A car that has been restored and maintained by someone who truly cared for it can be a much greater investment than a restoration or project car that can quickly become a money pit. In the end, however, it is your preference. Lastly, be sure to check the front suspension for an unusual wear. A car that has been in an accident can have front-end alignment problems, and with no camber adjustment to address it, this can be an ongoing problem that you should try to avoid.

For more Buyers Tips like these, The Beverly Hills Car Club welcomes you to connect with them today and encourages you to browse their website at your convenience to view 1964 Austin-Healey 3000 models currently available to you. Connect today!