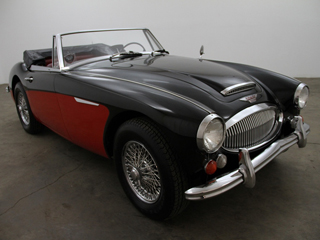 Launched in 1959, the Austin-Healey 3000 was not only a successful production car for the brand, but was also widely successful in the European rallies of the day. During its nearly ten year run, there were MKI, Convertible, MKII and MKII versions, plus assorted running changes in engine, chassis, gearbox, and body construction. While all of these improvements were logical and improved the car in a variety of ways, enthusiasts are happy that none of the changes hurt the cars overall character, style and appeal. During its last years the 1966 and 1967 3000s offered a top speed of approximately 120mph and were comfortable and well equipped. In fact, the MKIII is known for its luxury appointments when compared with previous MKI and MKII models. Buyers will find beautiful leather interiors, a handsome wood dash, roll-up windows, a fixed-windscreen and a slightly raised profile to limit the amount of exhaust scraping that previous models had seen over even the smallest road bump. No fewer than 5,494 1966 Austin-Healey 3000 models were produced in 1966, the highest one-year tally since 1960, when the original Healey 3000 was at its peak. Sadly, facing stringent U.S. emissions changes that would require extensive modifications, the Austin-Healey 3000 was put to rest in 1967 (with the exception of one car assembled in 1968).

Before you begin your search for a 1966 Austin-Healey 3000, be sure to do your research. Buyers Tips and Buyers Guides such as the ones found on this website will be helpful in identifying common shortcomings and problem areas. As with any classic European or American car, The Beverly Hills Car Club recommends buying the best car you can for your budget. You see, the chassis and bodywork on these 1966 3000 cars is the most important issue to consider. While engine and electrical issues can be worked out, a body that is plagued with rust or an example that has been in an accident and has a bent chassis can be a nightmare to restore or maintain. These are things you should think about and have inspected by a third-party mechanic. Having assisted countless clients find, negotiate and purchase the Austin-Healey cars of their dreams, it would be their great pleasure to assist you in your search. Whether youre looking for a pristine, fully restored example or would like to take on a restoration project, let the team of California classic car dealership professionals make your transaction as smooth and successful as possible.

When youre ready to explore the 1966 Austin-Healey 3000 models currently available to you, please feel free to use the search functions of this website to view current online inventory. Should you have any questions or would like to speak with a representative directly; the team is just a phone call or email away. Connect today to get started!