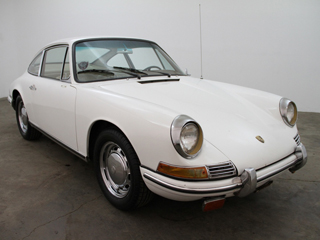 Released in 1965 and running until 1969, the Porsche 912 was an entry-level answer to the end of the long running Porsche 356. While the Porsche 911, which was the official replacement, offered a luxurious drive and powerful flat-six engine, the 1966 Porsche 912 presented buyers with an additional option with a four-cylinder 1600 SC engine from the 356. Aside from the engine, the two models were virtually identical and shared the same body shell, brakes, suspension and interior. There were a few areas of cost-cutting however, which could be seen in the 912’s plastic trimmed dash, fewer gauges, and painted wheels rather than chrome. More than 25,000 912 Coupes were produced between 1966 and 1969. In 1967 a Targa model was introduced with a removable roof panel of which approximately 2,500 were built between 1967 and 1969.

Given the relative low cost of the 1966 Porsche 912 compared to other classic Porsches, it is important to find the most complete and best-condition model you can for your budget. Because the 912 shares many of the same body and trim pieces as the 911, they can be costly and not worth the repair effort due to value. In fact, that is the number one Buyer’s Tip that the team at The Beverly Hills Car Club recommends. Furthermore, once you have found the car you’re interested in, be sure to have a third-party inspection that includes a thorough check for rust, originality and engine functionality. As with all classic cars, if the previous owner has documentation regarding ownership history, restoration or maintenance, this is an added benefit. Few changes were made between the 1965 and 1966 911 models, so both of these are great entry-level options for the first time collector or for the enthusiast looking for their first Porsche purchase.

A California classic car dealership based in Los Angeles, The Beverly Hills Car Club always has a nice selection of 911 and 912 Porsches in their inventory. To view the 1966 Porsche 912 models currently in stock, please do not hesitate to browse their online inventory at your leisure. Should you have any questions or want additional Buyer’s Tips, they are just a phone call away. Connect today to get started in your search!