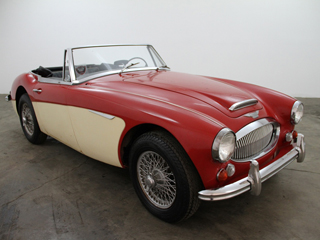 As more stringent emission and safety regulations began coming down the pipeline, Austin-Healey and the British Motor Company were faced with a decision. Do they redesign the illustrious Austin-Healey 3000 or do they retire it? With more than 90 percent of the Austin-Healey 3000 models being sent to the United States, this was a big decision. Engineers and owners decided in 1967 that modifying the Big Healey to meet these new requirements would be too costly, and with that, the car saw its end. With the exception of one single car that was manufactured in 1968, the 1967 Austin-Healey 3000 was the end of the Big Healey era. Approximately 42,917 Austin-Healey 3000s were produced during the 10 years of production. Interestingly, a successor to the 3000 MK III was re-engineered to meet American safety standards, adding a four-liter Rolls-Royce engine and automatic gearbox. It was lighter and handled better. Only two prototypes were built before the British Motor Company cancelled the project due to financial troubles.

One of the changes that were implemented on the 1967 Austin-Healey 3000 was the use of high-impact glass on all American cars that year. This is one of the ways you can tell an American version from one that stayed in Europe, if the glass is original of course. Previously, in 1966 a new crank pulley with built-in damper had been added as well as separate amber front and rear turn signals. If youre looking to purchase the quintessential Austin-Healey, the 1967 Austin-Healey 3000 is for you. While the downside is that it is probably one of the most expensive Big Healeys, the upside is it has exceptionally great looks and styling, a luxurious interior, the most powerful engine of the Big Healeys, excellent resale value, and a good selection of parts for maintenance and restoration. One of the most important Buyers Tips however, is to purchase the best Healey that you can for your money, as repairing and restoring is not always cheap.

When youre ready to explore the 1967 Austin-Healey 3000 models currently available to you whether as a restoration project or a pristine condition example let the team of California classic car dealership professionals at The Beverly Hills Car Club assist you. Connect with them today to get started!