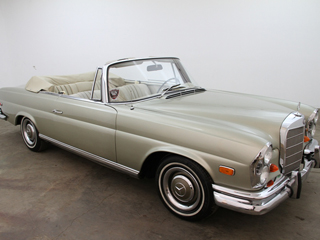 The Mercedes 250 series was a replacement to the 220 and 230 six-cylinder models of the early 1960’s, and was known as the company’s sensible sedan. With its subdued design, durable construction, leatherette interior, and reliable performance, this was an auto that was purchased not only by the rich and famous, but by families and professionals who appreciated the quality German engineering and the elegant and graceful styling. The 1967, Mercedes Benz 250SE and its sister models also did away with the rear fins in 1965 and completed the new look with a longer and lower body. Additionally, a new 2.5-liter, 128hp, six-cylinder engine was introduced in the 250S and 250SE models. However, this engine was replaced in 1968 by the 2.8-liter variation, which offered 180-hp. Designated the W108 internally, these are popular with collectors, with the most desirable models being the early floor shift models with the classic round gear knob, as well as the W109 300SEL’s.

When Mercedes released the initial lineup at the Frankfurt Auto Show in 1965, the lineup consisted of three W108’s: the 250S, the 250SE, and the 300SE, as well as the sole W109, the 300SEL. However, fewer than 3,000 W109’s were ever produced. Approximately 130,000 of the less powerful 250S and 250SE models were built during the first two years. The end of an era, the 1967 Mercedes Benz 250SE was not incredibly popular during its time, as the fuel consumption of the 3-liter in this application was becoming increasingly uncompetitive. This does not deter today’s collectors. The market for the 1967 Mercedes 250SE is widely popular, as many see this auto as a great example of Mercedes’ evolution. Whether you’ve been searching for a 1967 250SE for a while now or have recently come across one in the Beverly Hills Car Club inventory, you’ve come to the right place. As a renowned California classic car dealership, their specialists look forward to answering any questions you may have and to providing the Buyer’s Tips you need for a successful transaction.

Connect with The Beverly Hills Car Club to learn more about the 1967 Mercedes Benz 250SE today. They look forward to hearing from you soon and to helping you fulfill all your automotive dreams.