Selling or Buying a 1982 Maserati Merak? 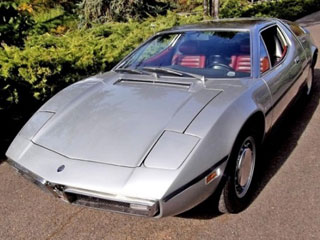 The Maserati Merak was introduced in 1972, one year after the Maserati Bora. The Merak was essentially a Bora fitted with a V6 engine instead of the V8. The smaller unit gave room for an extra row of seats, suitable for children or small adults, which made the Merak a more convenient sports car. The Maserati Merak offered satisfying performance, with a 3-liter, longitudinally mounted V6, capable of 220 hp for the models produced post 1977. A few variants of the Merak were offered, such as the more powerful SS from 1976 and the small production Maserati Merak 2000 GT from 1977featuring a 2-liter engine. The production of the Maserati Bora ended in 1980, while the Merak was still offered until 1983. However, numbers kept low and a total production of 1699 units was made for the 3-liter cars, along with 133 copies of the 2-liter cars.

Looking to purchase a classic Maserati?

If you’re in the market for a 1982 Maserati Merak, The Beverly Hills Car Club is ready to assist you. The Merak is a great classic and later models were fitted with better parts and systems, which improved the car’s behavior and makes servicing easier nowadays. The Maserati Merak was more affordable than the Bora and the Merak was also considered a reliable model, which makes it a good classic to own. Parts can be hard to find however, so be sure the model you’re looking at isn’t in need of some major servicing in the near future. One tip The Beverly Hills Car Club team will share with you is to thoroughly inspect the cam chain, as it has been reported a source of issue for a few owners. Call The Beverly Hills Car Club today for a complete list of tips and advice on how to make a smart 1982 Maserati Merak purchase. The team will answer any questions you might have about the model and can give you insight on current value and availabilities on the market.

The Beverly Hills Car Club is at your disposal and welcomes the opportunity to earn your business. Call today to inquire additional information on the services they offer and get started on your search for the perfect 1982 Maserati Merak.