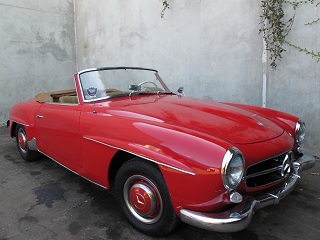 Are you looking to purchase a 1958 Mercedes Benz 190SL or any year Mercedes 190SL from the 1955 to 1963 production run? You’ve come to the right place. The Beverly Hills Car Club, the leading Los Angeles classic car dealership, is happy to give you some valuable buying advice within this 190SL Buyer’s Guide. First, let’s take a look at the history of this great auto. Max Hoffman, the United States importer of Mercedes during the time, persuaded the German automaker to build a simpler, less costly open model to complement the widely popular 300SL Gullwing. The resulting auto was the Mercedes Benz 190SL, which was introduced at the 1954 New York Auto Show. Then, just fifteen months later, the production version would be displayed at the 1955 Geneva Auto Show. While much of the car remained the same, several aesthetic aspects were changed, including the removal of the air-scoop that had been placed on the hood. The 300SL was initially priced at $7,460 during its day, while the Mercedes 190SL was just $3,990. As a result, the 190SL would outsell the 300SL nearly eight to one.

In its best year, 1956, a total of 4,032 units were produced, with approximately 25,881 units released throughout its production. The 1958 Mercedes Benz 190SL would see 2,722 units come out of the factory. If you are looking to buy a 1958 Mercedes roadster, you’ll find there are very few differences between the 1957 and 1958 models. In fact, at the end of 1957 red indicator lenses replaced amber ones in the U.S. market, while the dividing strip between stop and taillights was also removed. Perhaps the most notable change was in July of 1958 when new indicator and parking lights were produced for U.S. versions.

The 1958 Mercedes Benz 190SL is a great collectors car as well as an everyday driver for the European auto enthusiast. When buying, be sure to have the mechanics checked out by a third party. Once mechanics are inspected, potential buyers will want to check rust prone areas, as the 1958 190SL and other year models are prone to rust in certain places such as the jack points, floors, spare tire well, front fenders near headlights, and eyebrows above all four wheels. To learn more, contact the leading California classic car dealership, The Beverly Hills Car Club. Their team stands ready to assist you whether buying or selling any of the classic cars Los Angeles has to offer. Connect today to get started!