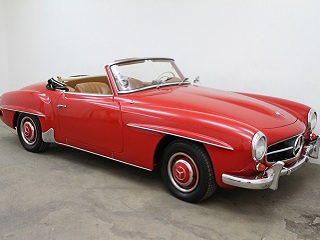 Designed as a grand touring car that would be sporty, graceful, and suitable for long-distance travel, the 190SL was introduced in 1954 and stood in obvious contrast to the 300SL Gullwing coupe and roadster that were considered the ultimate sports car of the time. Today, the 1959 Mercedes Benz 190SL and similar year models ranging from 1955 to 1963 have become collectible in their own right – enjoyed for what they were intended – their beauty and the pleasure of driving them. If you’re looking to purchase a 1959 190SL, the leading California classic car dealership, The Beverly Hills Car Club, looks forward to assisting you and to providing you with this Mercedes 190SL Buyer’s Guide filled with great Buyer’s Tips to help you find the 1959 Mercedes 190SL of your dreams. There are a number of reasons why European car collectors and enthusiasts turn to the 1959 Mercedes roadster. Among them are the car’s exceptional road handling thanks to individually mounted wheels on the front axle and double-wishbone suspension with hydraulic shock absorbers, its powerful 921 and 928 engine that produced 105 horsepower at 5,700rpm, and the availability of replacement aftermarket parts for restoration.

When you’ve decided the 1959 Mercedes Benz 190SL is the auto for you, there are a number of items you’ll want to check out before purchase. Most 1959 190SL models, as well as the sister year models, will have some rust in the chassis and/or the body. In fact, due to double-wall construction and poorly designed drain holes that often ended up clogged, many of these cars essentially rusted from the inside out. Rust can be the most labor-intensive and expensive challenge to deal with after the purchase of a Mercedes 190SL. The specialists at Los Angeles classic car dealership, The Beverly Hills Car Club, recommend a thorough examination for rust especially in the very important structural areas.

There were approximately 3,949 1959 Mercedes Benz 190SL models produced and approximately 25,881 throughout the production of the 190SL, of which approximately 50% are said to have survived. In comparison to other nameplates, this is a very low number, guarantying its exclusivity and rarity in today’s standards. To learn more about the 1959 Mercedes SL models, connect with the team at The Beverly Hills Car Club today! They look forward to hearing from you soon and to helping you find the auto of your dreams.