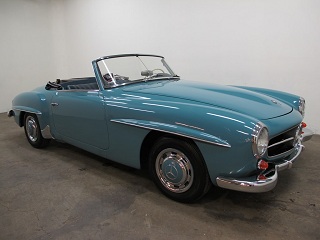 The 1960 Mercedes Benz 190SL was the vision of Max Hoffman, the Mercedes Benz U.S. importer of cars in the early 1950’s, as he recognized a place in the market for a lower priced complement to the prestigious 300SL. Hoffman’s marketing strategy was to capitalize on the 300SL’s win in the 1952 Carrera Panamericana Mexican road race, and anticipated exceptional sales for such sporty designs. At the time, the American auto market also brought great profits for the manufacturers of European sports cars. The Mercedes 190SL was officially introduced at the February 1954 International New York Motor Sport Show, along side the 300SL coupe, and received much praise and acclaim from the automotive press. The timeless design of the W121 or Mercedes 190 SL models is perhaps on of the major selling features of this exceptional automobile line. In fact, the Milestone Car Society voted the 190SL a “Milestone Car” and many design elements of the 1950’s SL autos are still used in the modern Mercedes Benz.

When you’ve decided the 1960 Mercedes Benz 190SL is the right collectors car for you, the leading California classic car dealership – The Beverly Hills Car Club – is happy to provide you with a few Buyer’s Tips to make your search more efficient. Perhaps one of the best tips they can provide is to find an example of a 1960 SL that has original body panel and chrome components. Even though the 1960 Mercedes 190SL was built on an assembly line, the car was still largely custom fit. For example, body panels were trimmed and fit to precise gaps, chrome was tailored and fit to the body panels, and the dashboard and top were modified to fit precisely; no two cars were identical. If you are looking to restore a 190SL, the labor involved in restoring a car that does not have its original body panels or chrome can be a huge, often unexpected expense. Mercedes Benz has made it easy to identify the originality of your chosen 190SL, as the doors, hood, drunk and top bow (as well as other parts) were stamped with the body number of the car. If you find matching numbers in several areas, chances are you’ve found a fairly original example. On the other hand, the classic cars Los Angeles specialists at The Beverly Hills Car Club can also help you find a fully-restored 1960 Mercedes Benz 190SL if you do not have the desire to work on a project vehicle.

This Buyer’s Guide is just the beginning of the many services and resources the team at The Beverly Hills Car Club will provide when you choose to partner with them in the search for your next collectors car. Contact them today to get started!