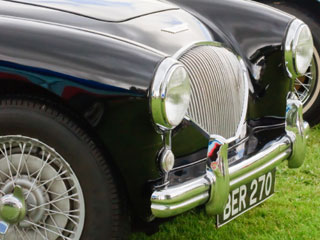 Widely considered to be the original Austin-Healey, the Austin-Healey 100 BN1, also known as the Healey Hundred BN1 and BN2 Series, were built by the British Motor Corporation between 1953 and 1956. While most enthusiasts do not differentiate the two series because the only noticeable variation was the adoption of the four-speed gearbox with overdrive introduced on the BN2 models, the four-speed gave the Austin-Healey 100-4 nearly two thirds more power than its MG TD competition. With a lower and better-balanced chassis, more torque and a streamlined body, the Austin-Healey quickly became a popular roadster option. Today, the 100-4s are popular and quite sought-after with British car enthusiasts because of its purity of line and, lets not forget the rakish fold-down windscreen.

Interestingly, the Austin-Healey 100 BN1 got the 100 in its name from Donald Healey, who selected the name from the cars ability to reach 100mph, as compared to the Austin-Healey 3000, which was named for its 3000 cc engine. Widely popular, it is no surprise that production got underway quickly and ramped up to the rate of nearly 100 cars per week. Most of these cars were sent to the American market where they were a great fit between Triumphs TR2 and the larger, more expensive Jaguar convertible XK120 and XK140 models. More than 14,500 Austin-Healey BN1 and BN2 series cars were built before the 100-4s were replaced by the 100-6 series.

Looking to buy classic Healey autos? If you are considering the Austin-Healey 100 BN1, the Beverly Hills Car Club suggests you give us a call. In brief, todays buyers want to see a paper trail including but not limited to service records, import certificates, any repairs or bodywork, and any purchase and sale history. The team also encourages you to connect with them to learn more about the Austin-Healey BN2, BN6, BN7, and BJ8 autos. Having assisted countless buyers and sellers of both American and European classic cars, it would be their pleasure to share their extensive knowledge and expertise with you. Connect with the Beverly Hills Car Club team today to get started!