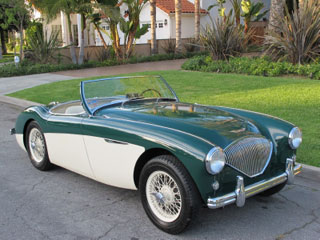 Whether you are purchasing a restoration project or a pristine Austin-Healey 100 for your private collection, there are a number of factors to take into consideration when looking to buy vintage Austin-Healey models. While condition plays a crucial role in the value of a vintage or classic car, ensuring you have chosen the right model for your needs is also paramount. Perhaps one of the most sought-after models is the Austin-Healey 100-S. Built primarily with racing in mind, only 50 production models of the aluminum-bodied 100S were made, plus an additional five special test cars which were hand built by the Donald Healey Motor Company at Warwick. The first production car in the world to offer disc brakes at both the front and rear, this is one of the most highly desired of the Austin-Healey classic cars. No matter what your preference, a 100-S, 100-4 BN1, or 100-6 BN6, the team at Beverly Hills Car Club can help you in securing your ideal vintage car.

To learn more about Austin-Healey 100 cars like the BN2, or to schedule a consultation regarding your specific needs, please do not hesitate to contact the team at Beverly Hills Car Club Beverly Hills Car Club today. Backed by years of car buying and selling expertise, we know exactly what you should be looking for and what to steer away from. Contact us today at (310) 975-0272 to get started!