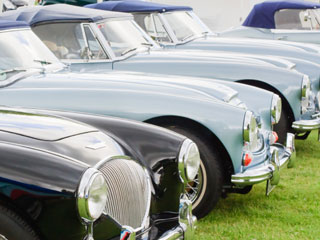 After creating the Nash-Healey in conjunction with George Mason in 1951, Donald Healey saw that there was a market for a fast, inexpensive sports car that handled well, but was more refined than an MG and less expensive than a Jaguar convertible. With a small development team, he began planning what would become the Austin-Healey BN1 Series and later the Austin-Healey 100 BN2. While these first and second-generation cars wore Austin-Healey 100 badges, internally the company designated the model BN1 and BN2 B indicating the Austin engine between 1000 and 3000cc and N designating it a two-seater. Later, cars with four seats would be labeled with a BT and when a true convertible top was fitted, rather than a roadsters detachable top, the model designation became BJ. Further, each model attached a numerical suffix, starting with 1 and ending in 1967 with 8 for the eighth version of the car.

While the Austin-Healey 100 BN2 was a near direct replacement to the BN1 models, there were several changes to the 1955 production of the second series. These cars had a true 4-speed transmission, as compared to the BN1s blocked-out first gear, and offered smaller front brakes and stiffer springs to improve the cars balance. One thing is certain; these Austin-Healey Roadster models are highly sought-after among British car enthusiasts. In fact, celebrity Jay Leno is known to have a 1956 Austin-Healey 100 BN2 in his private collection (of mostly US classic autos!). Whether youre looking to buy classic Healey BN1, BN2, BN6, BN7 or BJ8 models, the team at Beverly Hills Car Club would be happy to assist. A specialized dealer of classic European and American cars, their team encourages you to connect with them to learn more about the market for your specific vehicle.

The purchase or sale of any classic car, including the Austin-Healey 100 BN2, can be an exciting yet anxious process. Potential sellers are encouraged to contact the team at Beverly Hills Car Club to learn more about your options. Their team is always looking to purchase cars in any condition and will gladly pay a finders fee and will pick up from anywhere in the United States! If you feel you have a car that might fit into their collection, please do not hesitate to contact them.