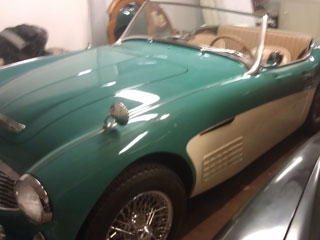 In August 1956, the Austin-Healey 100 – or the “Big-Healey” as it was often called – was produced with a six-cylinder engine and included a pair of small seats in the rear. While it was met with considerable criticism, it replaced the powerful 100-4 models and was a heavier car. Dubbed the BN4, which denoted a 4-seat roadster, an Austin-Healey 100 BN6 variant was introduced in March 1958 as a 2-seat roadster and was more inline with the original concept of the 100-4 models. In fact, this BN6 variant, or 100-6, outsold the BN4. Interestingly, the first sixes were built at Longbridge until December 1957 when production resumed at Abington. The model was discontinued in March of 1959, but some BN7 models, also known as the 3000, were produced with 100-6 badges.

Donald Healey was an avid racing enthusiast, so the Austin-Healey 100 BN6 was almost immediately on the track. Three racing modified cars were entered in the 1957 12-Hours of Sebring, with one of the cars finishing second in class. That same year, Corvette racer Dick Thompson agreed to race a 100-6 for the SCCA Championship and won. Today, many avid European sports car enthusiasts and Austin-Healey fans are looking for these Austin-Healey Roadster models for their private collections and garages. While many are looking for a quality specimen, there are many buyers out there looking for unfinished project cars, garage finds and partially restored models that they can rebuild from the ground up. If you are a potential buyer, the Beverly Hills Car Club encourages you to do your research on similar models and to touch base with them to determine the market for your specific model, whether it is the BN1, BN2, BN6, BN7, BJ8 or 3000 model.

When you’re ready to explore the sales options for your Austin-Healey 100 BN6, the team at the Beverly Hills Car Club looks forward to assisting you. From Jaguar convertible autos to Porsche, Austin Healey, Mercedes, Bentley, Bugatti and everything in between – you’ve come to the right place! Connect today to learn more about the many options available to you!