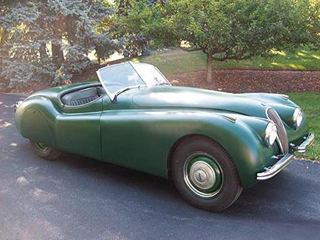 During the difficult post World War II years, one of the biggest US-dollar earners in the United Kingdom was the Jaguar sports car, thanks in part to the widely successful launch of the 1949 Jaguar XK120 Roadster. What is interesting is that the XK120’s creation only came about because delays in the development of the MK VII saloon car had forced William Lyons to push an alternative method for bringing the new XK six-cylinder engine to the market. Conceived and constructed in only a few short months, the 1949 Jaguar XK120 would launch in 1948 to rave reviews from not only the public, but also the automotive press. Offering radical lines, exceptional performance and an appealing price tag, the XK120 Roadster was the hit of the 1948 London Motor Show. Today, classic car collectors, auto enthusiasts and Jaguar lovers alike vie for the opportunity to own one of these rare early XK120 Roadster models.

Interestingly, Lyons only intended to produce 200 of the Jaguar XK120 models, so the resulting demand for what was the world’s fastest production car took the manufacturer by surprise. In fact, this demand made it quite obvious that the ash-framed bodywork, which was hand-built in the best vintage tradition, would no longer be acceptable. Approximately 242 of the first Jaguar XK120 models were manufactured using this wood-framed construction; ultimately to meet demand Jaguar would change to mass-produced pressed-steel bodies. Many of the 1949 Jaguar XK120 Roadsters are among the models that featured the wood-framed body. The heart of the 1949 Jaguar was however the XK engine. The 3.4L six-cylinder embodied the best of modern design and offered twin overhead camshafts running in an aluminum-alloy cylinder head. A maximum output of 160hp, paired with the lightweight XK120, produced an unbelievable power-to-weight ratio that drew much attention. If you’re looking to buy a 1949 Jaguar XK120 Roadster, one of the best Buyer’s Tips is to find as original a car as possible; this includes the engine and body panels. These of course are the most valuable and rare.

When you’re ready to explore the 1949 Jaguar XK120 Roadster options currently available to you, The Beverly Hills Car Club stands ready to assist you. A California classic car dealership based in Los Angeles with a worldwide reputation for fair and honest car deals, The Beverly Hills Car Club team has the industry connects and resources to connect you with the 1949 Jaguar XK120 you desire. Connect with them today to learn more and to begin your search. They look forward to hearing from you soon.