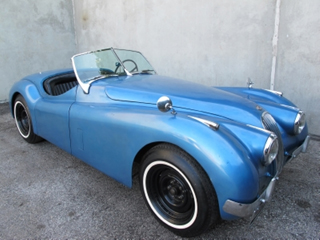 Originally designed to show off the new Jaguar XK engine, the Jaguar XK120 in its roadster form may have never been mass-produced had it not been for the overwhelming reaction by the crowd at the 1948 London Motor Show and by the automotive industry as a whole. In fact, the first 242 cars were aluminum-bodied, as Jaguar had not anticipated the unparalleled demand for this car. Production switched to steel in early 1950. The 1949 and 1950 Jaguar XK120 looked almost identical to its prototype except that the straight outer pillars of its windscreen would later be curved in the production version. Quite simply, the Jaguar XK 120 caused a sensation and Jaguar founder and design guru William Lyons had no choice other than to put it in production. Interestingly, the first 1949 production roadster, chassis number 670003, was delivered to American film actor Clark Gable, who is best known for his role as Rhett Butler in Gone With the Wind.

The XK120 was also renowned for its abilities on the track. In January 1950, Leslie Johnson drove the car to its first competition success in America, winning the production class in a race at Palm Beach Shores, Florida. William Lyons was vested in the future success of the Jaguar XK120 as a racecar and used extensive resources to continue development. Designed to be driven, buyers who are looking for a 1950 Jaguar XK120, or any Jaguar XK 120, generally are looking for solid cars with very few modifications. The Beverly Hills Car Club recommends the following Buyer’s Tips to help you find a solid car. First, as with any car purchase, have the vehicle inspected by a competent third-party that can verify which systems are in good working order. Second, ask the sellers for any historical or restoration documentation. If you’re purchasing a XK120 for restoration, be sure to understand what components will be able to be used in your project. Lastly, always follow your gut instinct. After spending some time with the car and doing your research, you’ll know if the car is meant for you.

In light of recent statewide events resulting from COVID-19, our showroom will be closed until further notice – currently early April. We are available online and by phone, and look forward to assisting you there.

We thank you for your continued support and send our most heartfelt thoughts to those impacted.