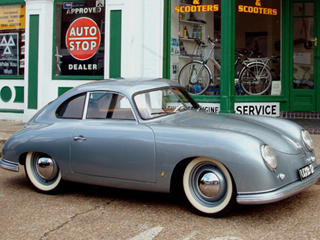 The 1950 Porsche 356 was the first volume-production Porsche and was the car that put the renowned German automaker on the map. A lightweight rear-engine two-door sports car available in both a hardtop coupe and open convertible, Porsche would produce the 356 with several variations until 1963. Throughout its production, more than 76,000 rolled off the floor in Germany – of which approximately half survive today. Created by Ferdinand Ferry Porsche, the son of Porsche founder Ferdinand Porsche, the 356 was a four-cylinder, air-cooled, rear-wheel-drive, rear-engine car, which used unitized pan and body construction. Much of the mechanics of the 356 including the engine, chassis and suspension were derived from the Volkswagen, however the design was an original. First debuting in 1948, Ferry quickly re-engineered and refined the car with a focus on performance.

As with any classic car, if you are looking to buy a 1950 Porsche 356 it is important to look at all documentation and to verify chassis and engine numbers to determine authenticity. Due to the Porsche 356 popularity, there are numerous manufacturers that produce replicas of these cars, which can easily be mistaken for an original if you are not careful. Chassis numbers are stamped in the trunk area in front of the tank, while the engine number is on the base of the generator stand as well as on the crank casing behind the fan housing. Rust is also a concern with the 1950 356 and other year models. Rust protection was not a major concern back in the 1950s. Rarity of 356 models means that replacing chassis parts and panels can be quite expensive. Many enthusiasts will tell you to buy a Porsche 356 for its body, not for its mechanics, as the mechanics can be restored easier than the body.

These are just a few of the Buyer's Tips offered by the team of industry experts at The Beverly Hills Car Club. A California classic car dealership with a reputation for honest, fair and professional car deals – their team would be delighted to assist you in your search for the perfect 1950 Porsche 356. In the meantime, be sure to browse their online inventory to view the 356 models currently available to you. They look forward to hearing from you soon!