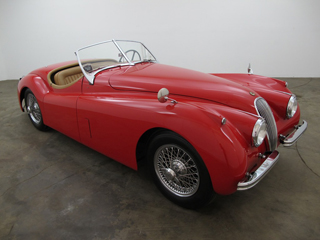 Greatly influenced by World War II, the British Automotive industry was hard hit during these times. Many manufacturers went out of business due to lack of funds, fuel and supply shortages, or their factories were simply destroyed during the war. In order to stay in business, William Lyons, owner of Jaguar, would need a solid production line. Thus the faster, more reliable, stylish and affordable Jaguar XK120 Roadster was launched. The early Jaguar XK120 Roadster models, starting in 1948, are often referred to as the Jaguar XK120 Alloy, named for the style of construction that was used on the first 242 hand-built models to leave the factory. The 1951 Jaguar XK120 Roadster, and other model-years, was designed to be a prestigious and low-number production car, yet excitement at the launch and high demand from the public would keep the XK as part of the Jaguar lineup for decades. The body of the car was reminiscent to the French curves produced by Bugatti and Delahaye during the 1930s and 40s, as was offered in a Roadster, a Fixed Head Coupe, and a Drop Head Coupe.

The 1951 Jaguar XK120 Roadster was powered by a 160hp, 3.4L, inline-six cylinder engine, with a promised top speed of 120mph; thus the name XK120. Designed as a touring car, many of the cars were actually raced during their day. If youre thinking about buying an XK120 from this era, their biggest weakness is often said to be the drum brakes, which wore quickly, and their steering wheel was heavy and less responsive when compared to the ones designed specifically for racing. However, if youre looking to add a 1951 XK120 Roadster to your private collection, these weaknesses probably dont mean anything to you. Most collectors idolize the XK120 for its beautiful curvature and sensational lines, not to mention their worldwide appeal as one of the most sought after collectors cars in the classic car market.

Whether youre thinking about buying a 1951 Jaguar XK120 Roadster and are looking for a pristine, showroom quality early model or are considering a restoration project, let the experts at The Beverly Hills Car Club make your buying experience a breeze. A California classic car dealership located in Los Angeles, their team has their finger on the pulse of the classic car market and can assist you in finding exactly the car you desire. Connect with them today to learn more. In the meantime, be sure to browse their online inventory for the XK120 models currently at their showroom.