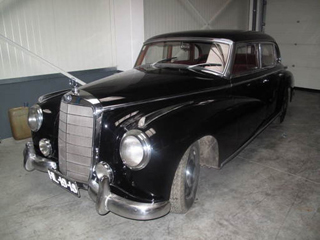 Prior to the release of the famous Mercedes Ponton models in 1963, the engineers and designers at Mercedes were already planning the release of the Type 300, also known as the “Adenauer” limousines. While these models looked very similar visually to the Pontons, the 1951 Mercedes Benz 300 had a separate body and frame – the defining difference. These unique autos were instant symbols of prestige and were used primarily by heads of state, royalty, governments, and even the Pope. In fact, from 1951 to 1962, the Mercedes 300 was among the most exclusive of the luxury car market. Thanks to high demand and notoriety, the Mercedes 300 had an 11-year production run, during which time the line saw several specification changes. There was the 300B, the 300C, the 300D, the 300S, and the 300SC. Among the car’s most notable owners are Big Crosby, the King of Jordan, the Prime Minister of Thailand, and Clark Gable, to name just a few.

If you’re considering the purchase of a 1951 Mercedes Benz 300, you’ve found the country’s leading California classic car dealership. The team at The Beverly Hills Car Club believes in educating their clients and prospects, and looks forward to providing you with the Buyer’s Tips and Buyer’s Guide you need to make a knowledgeable and sound decision regarding the purchase of your next European or American classic car. In 1951, there were only two pre-production models released, making the 1951 Mercedes Benz 300 easily one of the most sought-after autos in the classic car market. With its formal release in 1952, 262 units were produced. In total, however, only 591 total 300 and 300B units were produced from April 1951 to July 1955. To find these specific models, it is in your best interest to secure the guidance of a local classic car specialist like The Beverly Hills Car Club that has the connections needed to find you such a rare auto.

To learn more about the 1951 Mercedes Benz 300 or to speak directly with the team at The Beverly Hills Car Club, please do not hesitate to connect with them today. They look forward to hearing from you soon!