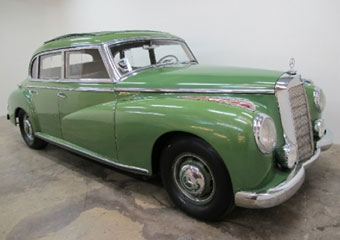 If you’re thinking about buying a Mercedes Benz 300, you’ve come to the right place. At the Beverly Hills Car Club, we believe in educating our clients and in providing valuable resources for buying classic Mercedes as well as other vintage and classic European and American autos. Interestingly, two years prior to the introduction of the Mercedes-Benz Ponton models, Daimler-Benz was already building the Type 300 limousines, also known as the “Adenauer.” To the casual observer, these models were very similar to the Ponton’s visually, however, the main structure difference was that the Mercedes 300 had a separate body and frame. Primarily used by governments, heads of state, royalty and even the pope, these luxurious and technologically advanced cars were among the most exclusive of the luxury car market from 1951 to 1962.

First introduced at the 1951 Frankfurt Auto Show, the Mercedes Benz 300 had an 11-year production life in which it underwent several specification changes. The 300 was succeeded in 1954 by the 300B, with 10 more horsepower, larger brakes, higher compression, and a pair of Solex carburetors. In 1955, the 300C was introduced and offered the first option for an automatic transmission. Production of the 300 C was stopped in June 1956, after Mercedes announced the cancellation of the 300’s, but was then reinstated with the 300D due to high dealer demand for the car. The 300 OD saw styling changes that included a flatter, squared roofline, longer rear fenders, a slightly wider grill and a longer wheelbase. Other extremely rare models, with only 760 units produced, are the 300S and the 300SC series. Combining old world, hand crafted workmanship with classic styling and exceptional interior appointments, it is no wonder that the Mercedes 300 was owned by the rich and famous including Bing Crosby, Clark Gable, the King of Jordan and the Prime Minister of Thailand to name just a few.

If you’re interested in learning more about the Mercedes Benz 300 line or would like to buy classic Mercedes of any model, the team at Beverly Hills Car Club stands ready to assist you. Connect with them today to learn more about the many opportunities available to you!