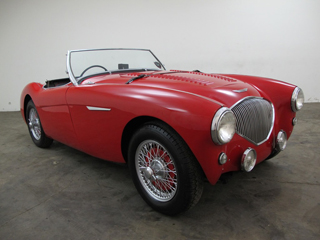 Built from 1953 to 1956, the Austin-Healey 100-4 BN1 and BN2 Series cars are considered the “original” Austin-Healey. While most British car enthusiasts do not differentiate between the two series, there are some differences. The primary difference was the adoption of the four-speed gearbox with overdrive in the BN2 models. Quite simply, Donald Healey saw a market for a fast, cheap sports car that handled well, but could be more refined than the MG and less expensive than the Jaguar. Offering more power than its MG contemporary and a lower sticker price than the Jaguar, it is no surprise that production got underway quickly and ramped up to more than 100 cars per week, mostly for the American market. Americans particularly loved the 1953 Austin-Healey 100-4 as an alternative to the Triumph TR2 and the Jaguar XK120 and X140 models. During their production, more than 14,500 Austin-Healey 100s were built before the 100-4 was succeeded by the 100-6 at the end of 1956.

The 1953 Austin-Healey 100-4, along with the other BN1 and BN2 year models, is a true two-seat Roadster that offers sleek and sophisticated styling. It is this styling and purity that makes it one of the most sought after British sports cars of the era. If you’re thinking about buying a 1953 Austin-Healey 100-4, there are some Buyer’s Tips you should consider. First, it is important to realize you’re buying a British car. Be prepared to deal with the infamous Lucas electrical systems, which can be incredibly unreliable and finicky. Whether you’re looking for a pristine example for your showroom or want a model of any condition that you can restore, you will not be able to avoid the issues that can crop up from these systems. Secondly, be sure to watch out for rust. As with any classic, rust can cause problems, but on the Austin-Healeys, severe structural problems have been known to exist from rust. The 100-4 is the true Austin-Healey classic, but be sure you know what you’re looking at. The last thing you want is to purchase an imposter or a car that will be an endless money pit. If you have any doubt at all, be sure to contact the team at The Beverly Hills Car Club for assistance. A Los Angeles based California classic car dealership, they can help you find, negotiate and purchase the 1953 100-4 you desire.

To learn more about the 1953 Austin-Healey 100-4 or any classic, connect with The Beverly Hills Car Club today. Leaders in the classic car industry, they look forward to assisting you and to providing you with the Buyer’s Tips and Buyer’s Guide you need to be successful. Connect today!