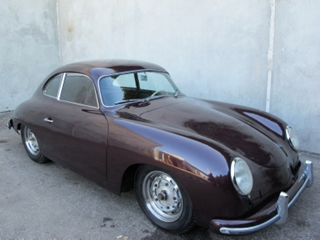 The world caught its first glimpse of Porsche’s first production car, the Porsche 356, in July 1948. Until then, Ferdinand Porsche had worked for more than fifty years for other manufacturers. Designed by his son, Ferry, this new Porsche received instant praise and acclaim from journalists and the public, at the same time winning its class in its very first race. Initially available as a coupe, cabriolet and later as a roadster, the 356 went through a number of evolutions before it was retired in 1965. The 1953 Porsche 356 marks the first production year that the Speedster was offered with the following engine options: 1100, 1300, 1500 and 1500S. Max Hoffman, an early importer of Porsches to the United States, was greatly responsible for the Speedster. He requested a rather stripped down and basic model for his American clientele, which included racing-style bucket seats, removable side curtains instead of roll-up windows and a low windscreen that weekend racers could easily remove. Today, the Speedster is one of the most desirable and iconic of the 356 models.

If you’re considering the purchase of a 1953 Porsche 356, you’ve come to the right place. Designed with buyers in mind, The Beverly Hills Car Club has filled this website with Buyer’s Tips and Buyer’s Guides for a number of classic cars, including Porsche 356 models. One of their biggest tips is verifying authenticity, which can be accomplished by checking chassis and engine numbers found stamped in the trunk area in front of the tank and at the base of the generator stand. Additionally, cars of this age received very little rust protection; therefore it is important to check for rust. Certain areas of rust can be easily fixed, while others can be quite expensive and difficult to get right. Many enthusiasts actually believe buying a car based on its body is more beneficial than buying a 1953 356 based on mechanics. Some of the most important areas to check include the suspension mounting points and the front and rear floor pans.

For more Buyer’s Tips or to explore the 1953 Porsche 356 models currently in The Beverly Hills Car Club inventory, please do not hesitate to contact their team today. They are always standing by to assist you and look forward to helping you find the Porsche 356 model you desire. Connect today to get started!