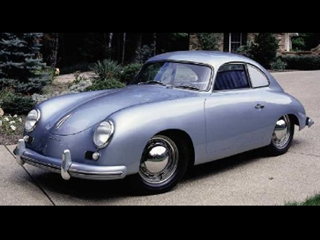 For Porsche purists, the Porsche 356 Pre-A is the model that distinguished the Porsche brand from the rest of its European counterparts and was the progenitor of the widely-praised and much-loved Porsche 911, which would run for more than five decades. Running from its debut in 1949 to April of 1955, the Porsche 356 Pre-A would be the first of several distinct models including the Porsche 356A, 356B and 356C. Always produced as a Coupe and a Cabriolet, the 356 would be offered as a glamorous Speedster during the 1954 model-year and later as a high-performance Carrera. Though the Pre-A models were quite raw and primitive, changes were implemented at a rapid pace and the 356 would evolve quite considerably before the 356A was launched. For those buyers looking for the aesthetics of a Pre-A, yet want some of the refinements seen prior to the 356A release, the 1954 Porsche 356 Pre-A is a good option. One of the most recognizable characteristics of a 1954 model-year Porsche 356 are the turn signals, which were mounted on the front in combination with a horn grille below each headlight. This grille was designed to allow cooling air to reach the front brakes. This grille is carried over to the 1955 models, so in order to know you’re looking at a 1954, you must also find two side by side round taillights on each fender.

Like all classic cars, there are some important factors to consider when purchasing a 1954 Porsche 356 Pre-A. The Beverly Hills Car Club team members have been assisting buyers with Porsche 356 purchases for years and understand the important Buyer’s Tips needed to ensure you’re buying the best 356 you can for your money. Of course, as you already probably know, rust is going to be your main culprit when it comes to the condition of the 356. These cars received little-to-no rust protection and as a result, most have varying degrees of damage. If you’re not interested in taking on a restoration, perhaps the best option for you is to find a model that has previously been restored. It that’s out of your budget, you may want to consider a model that has been restored in the past, but may not be in the best condition today minus rust. The advantage of purchasing a Porsche 356 is that the mechanics on these cars are generally reliable and have stood the test of time. They are also fairly easy to work on, so taking on a project in your garage is certainly doable for the average Joe with a little experience. Keep these tips in mind as you begin your search.

If you have any questions about the 1954 Porsche 356 Pre-A or would like to view any of the 356 models that are currently in The Beverly Hills Car Club’s inventory, please do not hesitate to contact their team of classic car experts today. They look forward to hearing from you soon!