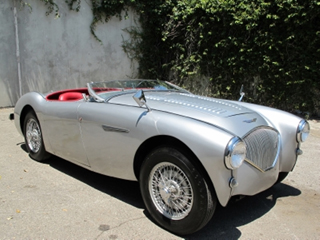 The Austin-Healey 100-4 was the first of three models that would later be called the Big Healeys to distinguish them from the much smaller Austin-Healey Sprite. Produced from 1953 to 1956, the 100-4 can be broken down into two models: the BN1 and the BN2, which replaced the BN1 in August 1955. The 1955 Austin-Healey 100-4 BN2 was fitted with a real four-speed manual transmission and overdrive on the top two gears, as opposed to the BN1s blocked-out first gear. The front wheel arches on the BN2 were also slightly larger, and optional two-tone paint became available. Popular color combinations included: White/Black; Reno Red/Black; Healey Blue/White; Black/Reno Red; and Florida Green/White. Other than this, there are very few differences that distinguish the BN1 from the BN2. If youre looking for an early Austin-Healey 100-4, youll want to do a thorough inspection and verify chassis and engine numbers to ensure youre looking at an original and to distinguish between the BN1 and BN2 models.

The 1955 Austin-Healey 100-4 had drum brakes all around and, if maintained properly, should not be an issue in years to come. Alternatively, the 48-spoke wire wheels are fragile, which is why 72-spoke wheels are often used to replace the originals. Some cars may be outfitted with Indian-sourced wheels that were popular in the 1980s. They were not made well and are not quite round, which leads to vibration. Search for the original 48-spoke wheels if youre looking for a truly original 1955 100-4. Other Buyers Tips for the 1955 Austin-Healey 100-4 include always checking thoroughly for rust, including putting the car up on a lift to check the underside. It is also important to remember that these are British sports cars, and they are renowned for having quirky Lucas electrical systems. While unreliable, they are pretty easy to work on.

Considered the most classic Austin-Healey, if youre looking for a 100-4, the team at The Beverly Hills Car Club would be delighted to assist you. As a California classic car dealership based in Los Angeles, they have a stellar reputation for professional and fair car deals and will happily help you find the 1955 Austin-Healey 100-4 to not only meet your needs, but to also exceed your expectations. Connect today!