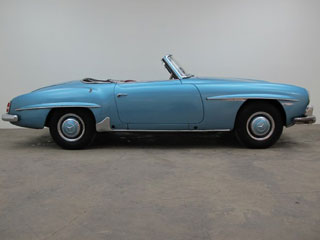 Known as Baby Merc or the Little Brother to the Mercedes Benz 300SL, the 190SL's make a great and fun collector automobile and theyre relatively affordable. Produced by Mercedes from 1955 to 1963, the 1955 Mercedes Benz 190SL was praised by Road and Track for its outstanding achievement in both quality of design and workmanship, as well as the general feeling of solidity which the car immediately conveys. Available as a coupe with a detachable hardtop or as a roadster with convertible top to which a hardtop could be fitted, these autos were widely popular with enthusiasts who could not afford the Gullwing. Although the car shared the same wheelbase with the 300SL, a number of the 190SL's components actually came from the 180 Saloon.

Several modifications were made between the unveiling of the prototype in New York at the New York Motor Show and the beginning of production in the Spring of 1955. The first uni-body Mercedes Benz used a steel chassis with aluminum hood, trunk lid, doors, and dash. Even with those aluminum pieces, the car weighed in at nearly 2,600 pounds. Many production changes were made during the 1955 Mercedes Benz 190SL development including, dashboard modifications to improve accessibility of switches under the steering wheel, the clutch operating lever was modified, a cigarette lighter with shrouded element, and the fuel filler pipe at tank inlet was cut off straight. For the coupe, the rear wheel arch eyebrows were fitted with decorative moldings, rivets on the soft top were replaced by fasteners, and interior door panels were fastened with clips instead of screws. These can be some of the indicators needed to determine you have original 1955 190SL when looking to buy classic Mercedes.