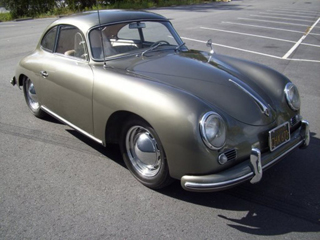 The Porsche 356A was the second generation in the 356 lineup, which ran from 1948 to 1965. Many significant improvements were incorporated into the 356A when it was first released in late 1955. First, the 1956 Porsche 356A chassis was changed, which made the cars easier to work on. Secondly, the dashboard was modified to accommodate the three-instrument cluster that would become standard throughout Porsche 356 production. One of the most noticeable changes to come about with the release of the 356A was the change from a bent windshield to a curved one. In fact, the curved windshield is one of the distinguishing factors between the 356 Pre-A and 356A models. Owners during this time, as well as collectors today, also appreciate the improved suspension, which made the 356A and later models handle and ride much better than their Pre-A counterparts. During 1955, the engine had already been changed to a three-piece case design that was now a true Porsche engine rather than a modified Volkswagen engine. These are just a few of the upgrades and characteristics of the 1956 Porsche 356A that stand out from other Porsche 356 classics.

Other than checking the originality and completeness of the 1956 Porsche 356A you’re considering, corrosion should be your biggest concern. There are several key places that you should inspect, including the suspension mountain points, the longitudinal chassis members and the front and rear of the floorpans. Another important area to consider is the front suspension area, as this area is of structural importance and is a prime location for rust and corrosion. As with the purchase of any classic, spending the time and money to have a professional inspect any potential purchase is money well spent. These early Porsche 356 models are quite expensive to restore and parts and body panels can be hard to find. Purchasing the best quality Porsche 356A you can find is always your best bet. In total, approximately 4,504 models of the Porsche 356A were produced in 1956, including Coupe, Cabriolet and Speedster body styles.

For more information on the 1956 Porsche 356A or to inquire about further Buyer’s Tips, please do not hesitate to contact the team of classic car professionals at The Beverly Hills Car Club. In the meantime, they encourage you to browse their online inventory to see if they have the 1956 356A you desire. Connect today to get started!