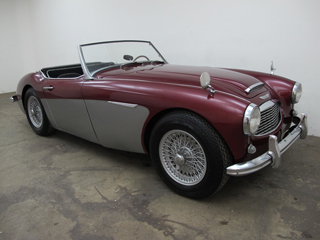 The Austin-Healey 100-6, originally launched in 1956 to replace the 100-4, quickly got a bad reputation in the automotive press for being slower than its predecessor despite its new six-cylinder engine. Apparently the new engine had not been thoroughly tested for its new set of wheels, and really didnt perform any better than the car it had replaced. Austin-Healey quickly made steps to rectify this shortcoming, and in 1957 launched a redesigned, better breathing six-inlet-port head design. This release would later be known as the 6-Port Head, and was sold as a factory option for owners of the 1956 100-6 who could bolt the new arrangement right in place of the old head. To further assist in overcoming the negative press associated with the launch, Austin-Healey started labeling the updated 1957 Austin-Healey 100-6 with the name Mille Miglia after the famous Italian auto race in Brescia.

Today, more than fifty years later, the bad press has long been forgotten as the Austin-Healey 100-6 (and 100-4) has made a comeback in the collectors market. Less mainstream than the MG, more glamorous than a Triumph, and less costly than a Jaguar, the 1957 Austin-Healey 100-6 is the epitome of British 1950s and 1960s style and elegance. When purchasing a 1957 100-6, be sure to consider the following Buyers Tips. First, it is imperative to thoroughly inspect the car for rust. Whether youre buying a car with the intention of restoring it or are purchasing an already restored example, place the car on a lift to get a good picture of the underside. Also check between the doors, around the floorboards and around the windshield, as these are areas that are prone to rust. Try to find an example with a minimal amount of rust because body parts can be difficult and expensive to find. It is also important to have a third-party inspection, particularly if this is a running model. Youll want to ensure engine components are working properly, as well as brakes and electrical systems. The 1957 Austin-Healey was offered with a two-tone paint option; keep this in mind. An original with two-tone paint can have a higher value than a turnkey example.

These are just some of the Buyers Tips that the California classic car dealership professionals at The Beverly Hills Car Club can assist you with when searching the market for a 1957 Austin-Healey 100-6. To learn more, give their team a call today. They look forward to hearing from you and to helping you find the Healey you desire. Connect today!