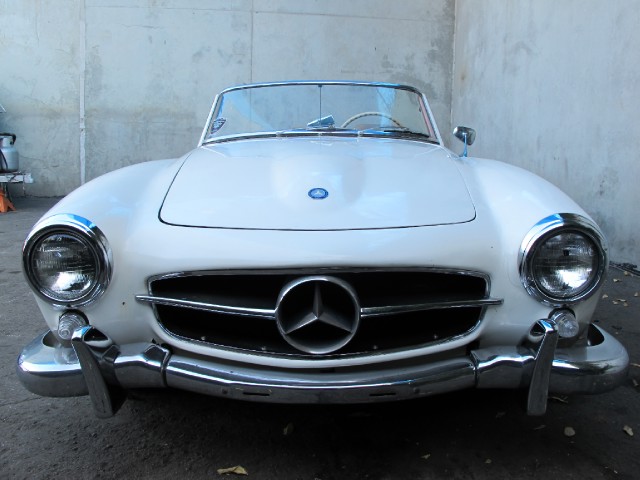 A two-door grand touring convertible that was produced by Mercedes-Benz between May 1955 and February 1963, the 1957 Mercedes Benz 190SL was also available with a removable hardtop and fully independent suspension. This suspension, paired with beautiful styling and world-class German engineering, made the 190SL very similar to the faster and more expensive Mercedes 300SL. A technical advancement during this era, both models offered the double wishbone suspension at the front and swing axles at the rear. Approximately 25,000 of the 190SL models were built throughout the cars production period. The 1957 Mercedes Benz 190SL differentiated itself from the other year models as the bumper over-riders on the US version became standard equipment on all models after July 1957. The 190SL was also available as a soft-top Roadster or as a coupe with a removable hardtop. Another item of optional equipment, which today makes a collector car more valuable, is the sports version for racing. This version included lighter doors with a cutout for the arm, stripped away bumpers and a small Plexiglass windshield in front of the driver instead of a traditional windscreen.

One of the larger production years, the 1957 Mercedes Benz 190SL saw approximately 3,332 units roll off the production line. Whether youre looking for a 190SL as your daily driver, want a pristine example for your private collection, or are searching for the right restoration project for your family, the team at The Beverly Hills Car Club can help you find the right auto for your needs. The 190SL Roadster and Coupe models were particularly prone to rust. For this reason, the team recommends a third-party inspection that includes putting the car on a lift to view any rust damage. Additionally, the team can help you verify the cars authenticity by finding VIN and chassis numbers. Should you have any questions or would like to get started in your search, the Beverly Hills Car Club is standing by! Please feel free to browse this website to learn more about the 1957 Mercedes Benz 190SL and similar models, and to explore the autos currently in inventory. For more information, please do not hesitate to contact The Beverly Hills Car Club today! They look forward to hearing from you and to helping you find the auto to not only meet your needs, but to also exceed your expectations! Connect now!