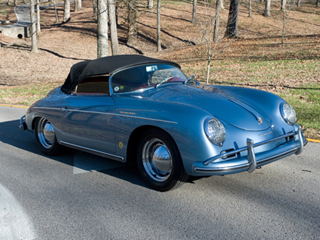 Approximately 1,171 models of the 1957 Porsche 356A Speedster would roll off the Porsche production floor in Germany during this production year. Not to be confused with the soft-top Cabriolet, which was the open-air version of the Coupe model, the Speedster was its own distinct model and did not correspond to an equivalent Coupe. First introduced in late 1954, the Speedster was added to the 356 lineup thanks to Max Hoffman, the sole U.S. importer of Porsches. He believed that a lower-cost, somewhat raw open-top version of the 356 would sell well in the American market. It featured a low, removable windscreen, bucket seats and a minimal folding top. It was an instant hit, particularly in Southern California where the weather made owning one of these beautiful sports cars simply irresistible. The 1957 Porsche 356A Speedster would see the highest level of Speedster production, which would then decline. The Speedster would be replaced in late 1958 by the 356 Convertible D model.

Today, because of their low production numbers and open-air appeal, the Speedsters are some of the most sought-after among the 356 lineup. If you’re looking to purchase a 1957 Porsche 356A Speedster, or any Speedster from the Porsche 356 line, it is imperative to first ensure you’re looking at an original. The Porsche 356A Speedster is a very popular replica and kit car; you’ll want to ensure you check engine and chassis numbers to confirm the Porsche you’re looking at is indeed a Porsche. Similarly, you’ll want to ask the seller for any documentation they have regarding ownership history, maintenance, restoration or repair. These documents can be a great insight into the car’s overall condition. As with all classic cars, you’ll want to secure a third party, pre-purchase inspection from a qualified Porsche mechanic. They can help you evaluate the condition and originality of the car. These are just a few of the tips that the team at The Beverly Hills Car Club has learned over their years of working in the classic car marketplace.

The 1957 Porsche 356A Speedster is a fantastic car to consider whether for your next restoration project, your showroom or as your occasional driver. No matter what type of Porsche 356 you’re interested in, be sure to contact the team at The Beverly Hills Car Club today to learn more. They also encourage you to browse their online inventory to view the 356 models they currently have available to you at their California classic car dealership. Don’t see what you’re looking for? Connect with their team today to begin discussions and to find the 356 you desire. They look forward to hearing from you soon.


We Also Buy Classic 1957 Porsche 356 A Speedsters In Any Condition, Top Dollar Paid.