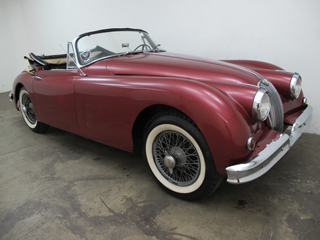 The 1959 Jaguar XK150 was a special year in the XK150 lineup, as it marked the release of the 3.8-litre version of the famous XK engine. Offering more than 220hp in the standard version, and 265hp in the poplar S version, the 1959 Jaguar was fast and powerful for its time. Although the chassis was carried over from the XK140, the XK150’s now included standard equipment such as four-wheel disk brakes, which was a first time this option had been offered in an auto built in series production. Due to its luxurious appointments, graceful styling and unwavering power, many considered the Jaguar XK150 to be a fast touring car rather than an out-and-out sports car. Unlike its predecessors, the XK150 was very seldom raced or rallied. Throughout its production from 1957 to 1961, approximately 9,395 examples were manufactured.

If you’re considering the purchase of a 1959 Jaguar XK150, there are a few Buyer’s Tips you should take into consideration. First, know what model you want. The Drop Head Coupe models have always been the most popular. The most practical of the XK series, the DHC was open but with a proper hood, unlike its OTS (open two-seater) counterpart. The Jaguar XK150 OTS is often considered to be for the Jaguar purist, while those looking for a car capable of long touring trips have most often purchased the FHC. Second, know what kind of condition you want the car to be in. Are you looking for a weekend driver, a showroom piece, or a restoration project? Additionally, as with buying any classic, you will want to have any car you are considering buying inspected by a third party to ensure its originality, completeness, and mechanical soundness. If you’re purchasing a non-running body, be sure to inquire thoroughly about rust and any part that may come with the sale.

As a renowned California classic car dealership that has assisted countless clients in the purchase and sale of European and American classics over the years, the team at The Beverly Hills Car Club can help you find the Jaguar XK150 you desire. From the 1959 Jaguar XK150 to the first XK120 models, connect with their team today to learn more about your options. In the meantime, be sure to check out their online inventory via this website.