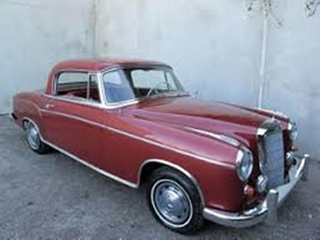 During World War II, Mercedes Benz’s Stuttgart factories were destroyed. After the war, Mercedes began its postwar reconstruction with a limited production of the Type 170 sedan. The profits from these operations were reinvested in building new facilities and in designing and developing the new models that would lead Mercedes Benz into the future. A completely new range of autos immerged in 1951 as the 220 and 300. Produced from October 1958 until the end of 1960, the main model of this collection was the Mercedes Benz 220SE. Offered as a Coupe, Cabriolet and Sedan, it was the last of the Ponton series. If you’re looking to purchase a 1959 Mercedes Benz 220SE Coupe or any postwar Mercedes you’ve come to the right place for reliable information and Buyer’s Tips.

In 1959, the 220SE Coupes and Cabriolets received a 2.2L, fuel injected engine that would give them the power they needed, as they are very heavy and cumbersome automobiles. Over the four years of production, it is estimated that only 830 models of the Mercedes 220SE Coupe would roll off the production floor, making them very rare in today’s classic car market. One of the perks to the Cabriolet and Coupe models is that they are mechanically very similar to their Sedan counterparts, making parts relatively easy to find. Some of the key areas to look out for when buying a 1959 Mercedes Benz 220SE Coupe include the following. First, most examples will need water pumps and engine mounts over time. Exhausts also hang low and usually have some damage. Windshield wipers are sluggish and door locks can get weak. Rust is also a problem, with common areas of corrosion being the spare tire well, trunk floor, suspension mounts, bumper mountings, lower firewall, and floors. Overall, however, the Mercedes 220SE is a rugged auto and makes a great addition to any garage, even as an occasional driver.

When you’re ready to learn more about the 1959 Mercedes Benz 220SE Coupe or the Cabriolet and Sedan models, The Beverly Hills Car Club looks forward to assisting you. A renowned California classic car dealership with a reputation for fair and honest car deals, they welcome you to browse their online inventory and to contact them with any questions you may have. Connect today to learn more!