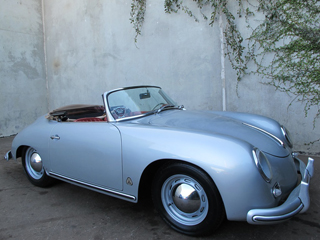 As 1959 approached, the Porsche 356 design still had a lot of life left in it. As such, Porsche debuted the Porsche 356B at the Frankfurt Auto Show in late 1959 as well as a Speedster D model (renamed Convertible D shortly after its release), which replaced the highly desired Speedster. The visual appearance of the 1959 Porsche 356 Type B was quite different than its predecessor Type A models. A more massive front bumper with jumbo guards was perhaps the most notable, and was also elevated four inches for better protection. Similar changes happened on the rear bumper. Headlights on the 1959 Porsche became more upright, which lead to nearly straight front fenders. Buyers also found more chrome adornments and a pair of slots cut below the front bumper for brake cooling. Controversial at first, many Porsche purists thought the changes to the 1959 356 were kin to something General Motors could produce but like most factory changes, they were soon accepted.

The Convertible D model, released also in 1959, featured a taller, more practical windshield, glass side windows, and more comfortable seats. At the time, this was the most coveted model. If you’re considering the purchase of a 1959 Porsche 356 of any body style, it would be the pleasure of The Beverly Hills Car Club to assist you and to introduce you to the 356 models they currently have in inventory. A California classic car dealership based in Los Angeles, with a stellar reputation for honest and professional car deals, their team has their finger on the pulse of the classic car market and can help you find the car you desire. From barn-find 356 models that have sat untouched for decades to the most pristine showroom quality Speedster, connect with their team today to learn more. In the meantime, they encourage you to browse this website to learn more about Buyer’s Tips for the Porsche 356 and other classics, and to view their online inventory with ease.

Searching for a 1959 Porsche 356 can be an exciting time. To ensure you’re success, connect with The Beverly Hills Car Club today to discuss your specific desires. They look forward to hearing from you and helping you find the classic that not only meets your needs, but that also exceeds your expectations. Connect today!