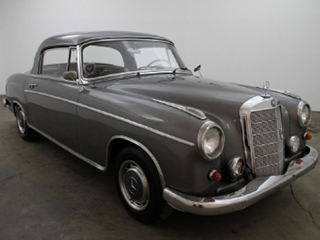 The Mercedes Benz 220SE Coupe was launched in October 1958 as an upgraded version of the 220 and was offered in addition to the Coupe as a Cabriolet and Sedan. The 1960 Mercedes Benz 220SE Coupe would be the last year of production for the original 220SE Ponton, although the 220SE would live on as the 220SEb fin-body Sedans, and as a Coupe and Cabriolet. The Ponton series 220SE has design roots dating back to 1953 with the Mercedes 180 Sedan and featured a unitized body/frame construction with a fully independent suspension. A 2.2L straight-six engine with an overhead camshaft and Bosch mechanical fuel injection offered the power the 220SE needed, as it was quite heavy. Comparably priced to the Cadillac models of the day, the 1960 220SE was widely popular during its time and today. If you’re thinking about buying a 1960 Mercedes Benz 220SE Coupe, you’ve come to the right place for information and Buyer’s Tips.

In total, only 830 Mercedes Benz 220SE Coupes were manufactured over the four-year production period, making them highly desirable as collector cars. Very luxurious for their time, the 1960 Mercedes Benz 220SE Coupe was outfitted with polished wooden dashboards and door inserts, leather upholstery and chrome trim. When purchasing a 220SE Coupe, one of the most important questions to ask the seller is whether or not the model is equipped with the original Hydrak clutch or if it has been converted to a regular clutch system with pedal instead. While the Hydrak clutch was quite innovative for its day, actuating automatically as the driver moved the gearshift level that would give two pedal control with no clutch pedal, it was plagued with problems and would become one of Mercedes’ less successful options. The other important issue with the 220SE is rust. No matter what condition example you’re looking at whether fair or pristine you’ll always want to perform a thorough inspection for rust including the trunk and floor, jack points, bumper attachments and door sill among others.

For more information on the 1960 Mercedes Benz 220SE Coupe or to browse available models, The Beverly Hills Car Club welcomes you to contact them today. Located in Los Angeles, they are a California classic car dealership with a reputation for fair and honest car deals. Let them share their knowledge and experience with you. Connect today to find the Mercedes 220SE you’ve always desired.