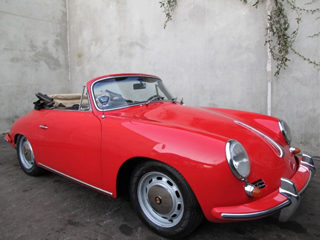 With the exception of the excessively rare 50 pre-production Porsche 356 models produced in Austria for about two years, the Porsche 356 was built near Stuttgart from 1950 to 1965. Over this 15-year production run, four major model types were released: the 356, 356A, 356B and 356C. The early 356 models are often called Pre-A models as a way of avoiding confusion when talking about the earliest models. Launched in 1960, the 356B was a milestone in the evolution of the Porsche 356 line as there were some major changes from the previous models. The most striking change was made to the front end. The hood became flatter, with a massive chrome handle replacing the polished aluminum one found on the previous models. The bumpers were also higher and bigger, and had a pointy shape. Headlights were also raised and the front fenders now made nearly a straight line from the windshield posts to the headlights. This would also be the last year that the Porsche script could be found on the front of the car. The 1960 Porsche 356B Cabriolet, the soft-top version, also ran alongside the Coupe and Roadster editions. In total, approximately 1,616 Cabriolet models would be released during the 1960 production year.

When compared to the more than 4,400 Coupe models and 1,528 Roadster models released during the same year, the Cabriolet is considerably more difficult to find today than the Coupe examples. Additionally, Cabriolet models often seem to be in a bit rougher condition, as many were exposed to the elements throughout their lifetime. When buying a 1960 Porsche 356B Cabriolet, be sure to have a thorough pre-purchase inspection done to help you understand the overall condition of your classic. The Porsche 356 is known for having a fairly high cost of restoration, so be sure to do your homework to know exactly what you’re getting into. Asking the seller for any documents showing history of ownership, maintenance or repair records, and restoration receipts (if applicable) can also be great glimpses into the car’s history. These are just a few of the Buyer’s Tips that the team at The Beverly Hills Car Club has learned over their years of experience in the classic car marketplace.

Renowned as a Los Angeles classic car dealership with a reputation for fair and honest car deals, the team at The Beverly Hills Car Club is always available for consultation regarding the purchase and sale of any classic. Whether you’re looking for a 1960 Porsche 356B Cabriolet in pristine condition or any 356 model that would be a good candidate for restoration, let their team be your guide. They look forward to hearing from you and to helping you find the Porsche 356 classic that best suits your needs. Connect today!


We Also Buy Classic 1960 Porsche 356 B Cabriolets In Any Condition, Top Dollar Paid.