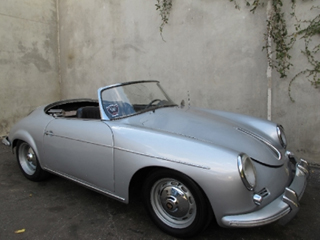 Open-air models such as the 1960 Porsche 356B Roadster and the earlier Speedster models were generally more susceptible to the elements and can often have more damage to their interior components. Cracked leather and wood, tarnished or missing chrome pieces, and overall worn out components can be signs that the car had a tough life. Remember, these cars were designed to be raced, to be driven hard and to be enjoyed. They are also more than five decades old even the most original example will have its fair share of problems. Always have a third party, pre-purchase inspection performed by a qualified Porsche mechanic that specializes in classics. Have the mechanic do a thorough inspection for rust and, if applicable, for any mechanical components that will need extensive work. You’ll also want to look for bodies that are in the best condition, as finding body panels and parts can be expensive and often difficult due to the rarity of these cars. These are just a few of the considerations you should keep in mind while exploring potential purchases.

When you’re ready to explore the 1960 Porsche 356B Roadster models currently available to you, the team at The Beverly Hills Car Club welcomes you to tour their online inventory. A California classic car dealership with unparalleled experience in the purchase and sale of European classics, it would be their pleasure to help you find the Porsche 356 model you desire no matter the location, condition or price. Connect with them today to get started and to be one step closer to seeing a 356 in your garage!


We Also Buy Classic 1960 Porsche 356 B Roadsters In Any Condition, Top Dollar Paid.