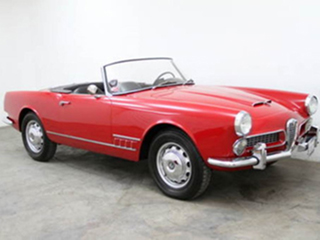 Also known as the Alfa Romeo Series 106, the Alfa Romeo 2600 would be the manufacturers flagship six-cylinder produced from 1961 to 1968. The much anticipated successor to the Alfa Romeo 2000, the Alfa Romeo 2600 has become highly desirable in the classic car market, as it was the last Alfa Romeo to have an inline six-cylinder engine with twin overhead camshafts. This had been the traditional Alfa Romeo engine configuration since the 1920s; however, after World War II the company would move to four-cylinder engines as the factory shifted towards more economical cars that were easier to mass-produce. The 1961 Alfa Romeo 2600 was available as a Sedan, known as the 2600 Berlina, which offered a factory-built body. A 2+2 Convertible with a body by Carrozzeria Touring would also be offered as the 2600 Spider, and a Coupe with a body by Bertone was released as a 2600 Sprint. These models of the 1961 Alfa Romeo 2600 would be based on the corresponding models in the 2000 range, and would inherit the body styling of the previous range with minor changes. While the 2600 models were not considered a great sales success at the time, collectors and enthusiasts enjoy the opulent styling, performance and technology of the Sprint and Spider models in particularly.

Like many classic cars of this era, the 1961 Alfa Romeo 2600 is prone to rust especially models that were not taken care of over the years. Additionally, with approximately 2,038 Berlina Models, 2,255 Spider models, and 6,999 Sprint models produced throughout the lifetime of the 2600, certain parts and body panels can be difficult to find today. When purchasing one of these classic Alfa Romeo models, be sure to find the best condition example you can within your budget. This can save you thousands of dollars in restoration. Similarly, while the Alfa 2600s mechanics are generally easy to work on, finding a model that is in good, driving condition can mean all the difference. For more Buyers Tips like these, The Beverly Hills Car Club encourages you to contact them today! Backed by years of experience in the classic car market, their Los Angeles classic car dealership is poised and ready to assist you in finding the classic Alfa Romeo you desire.

In the meantime, their team welcomes you to browse this website to view their current inventory of 1961 Alfa Romeo 2600 models and reminds you to contact them with any questions you may have. Dont see exactly what youre looking for? Call their team today to speak with a classic car expert. They look forward to hearing from you soon!