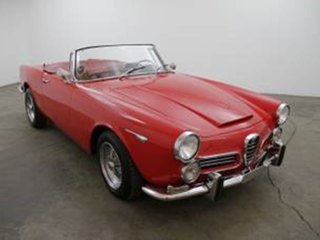 The Alfa Romeo 2600 would debut in March 1962 at the Geneva Motor Show and would effectively replace the Alfa Romeo 2000. It would use essentially the same chassis with modifications like the adoption of disc brakes at the front, but would have exterior design changes. The Berlina, for example, is recognized by the addition of two headlights in the front grille and by the reduction of the rear fins found on the wings. On the other hand, the Alfa Romeo 2600 Spider would gain quarter-lights, while the Alfa Romeo 2600 Sprint would see the addition of a bonnet duct. The biggest change for the Alfa Romeo 2600, however, was the engine. A new six-cylinder 2.5L engine would now boast more than 130hp in the Berlina and 145hp in the Sprint and Spider variations. Derived from the Giulietta engine, a reduced bore and stroke and an additional two cylinders would help achieve these gains. The five-speed gearbox would continue to be used, as was the column shift and front bench seat in the Berlina until 1965. The Sprint and Spider would use a floor-mounted shift.

If you’re thinking about buying an Alfa Romeo 2600, in addition to the Berlina, Sprint and Spider variations, there are several special models for consideration. The Alfa Romeo 2600 Sprint Zagato, a two-door coupe of which only 105 were built, and the Alfa Romeo 2600 De Luxe, a Berlina that looks similar to the Sprint, but with four-doors and only two headlights of which only 54 were made by OSI, are the two most sought-after Alfa 2600 models. Production would continue until 1969, although no large saloon car was designed to replace the 2600 until the Alfa 6 was debuted in 1979. In total, it is estimated that 2,038 Berlina models, 2,255 Spider models, and 6,999 Sprint models were produced. As with most classics of this era, finding an example that has little rust and body damage should be your primary concern, as well as finding an example that is as complete as possible within your budget. With low production numbers, finding components for an Alfa Romeo 2600 restoration can be difficult and expensive.

For more information on the Alfa Romeo 2600 or to explore the classic Alfa models currently available at The Beverly Hills Car Club’s California classic car dealership, please do not hesitate to contact their team today. They look forward to hearing from you and to helping you find the Alfa Romeo 2600 classic that best suits your needs and meets your goals. Connect today to get started!