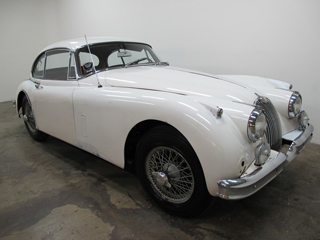 The last year of production for the sport touring Jaguar XK150, the 1961 Jaguar XK150 offered all the technological advancements and styling changes that had occurred throughout the life of the XK series. For the Jaguar enthusiast who wants to have the best of the XK series, this is it. It is important, however, that you select one of the later year models, as the early XK150’s were actually less powerful than the earlier XK140 models. Jaguar eventually evolved the 3.4-litre straight-six engine into a 3.8-litre S engine that had more than 265 horsepower and could exceed 135mph and could reach 60mph from a dead stop in seven seconds. If you’re searching for the best of the XK series, youll want to ensure you select a model with this 3.8-litre engine. In total, more than 9,300 Jaguar XK 150 models were produced.

The California classic car dealership specialists at The Beverly Hills Car Club also offer the following Buyer’s Tips for those interested in the 1961 Jaguar XK150 or any other Jaguar XK. First, it is important to understand that very few Jaguar XK150’s were actually made in 1961, as production was stopped after 1960. To find a 1961 Jaguar XK150 of any condition can be quite difficult. Furthermore, as this was the last of the XK150’s, the 1961 offered numerous options. Available not only in the 3.4-litre versions, but two versions a normal and an S model of the 3.8-litre engine were available. All three body types were available will all engine options. During this time, the Fixed Head Coupe and the Drop Head Coupe models also lost their extensive use of walnut, and revered to leather trimmed dashboards. These are just a few of the notable changes towards the end of the XK series of Jaguars.

If you’re interested in more Buyer’s Tips or would like to inquire about a 1961 Jaguar XK150 with the team at The Beverly Hills Car Club, they are standing by to assist you. The encourage you to browse their online inventory using this website and welcome you to contact them with any questions you may have. Connect today to get started and to be one step closer to the car of your dreams.